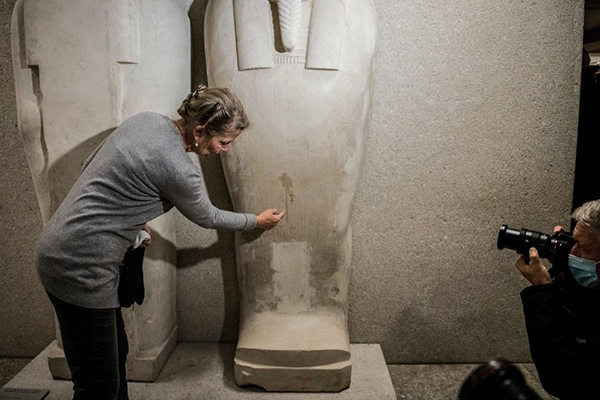 Friederike Seyfried, director of the Egyptian Museum Berlin, points to the damage caused by an “oily liquid” that left visible stains on exhibits in the Egyptian part of the Neues Museum. Photo: Stefanie Loos/AFP/Getty Images.

Kate Brown, An Art Foundation Has Pledged €100,000 in Aid to a Group of German Museums Attacked by Vandals. But Security Questions Still Linger, Artnet, 22 October 2020

The perpetrators of the attack remain at large.

A foundation that supports museum acquisitions is offering swift aid to a handful of Berlin institutions that were attacked by vandals earlier this month.

The Ernst von Siemens Art Foundation says it will provide €100,000 to assist the museums with the restoration of 63 objects, including several loans, that were damaged by attackers on October 3.

In a statement, the foundation described the incident as a “great horror.” A Berlin State Museums spokesperson told Artnet News that the institutions were “very pleased about the fast and unbureaucratic support.” The total costs of the damage have yet to be assessed.

Authorities told press this week that they believe the crime was carried out sometime between 10 a.m. and 6 p.m. on October 3, though they have not been able to determine whether the act was done by one or several perpetrators.

The incident took place on the anniversary of German reunification, which also happened to be the first day of the Pergamon Museum’s reopening since the lockdown earlier this year. The museums had 3,000 visitors that day. 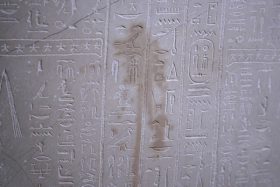 A stain left by an assailant is visible on an ancient Egyptian stone sarcophagus. Photo: Sean Gallup/Getty Images.

The markings made by vandals, which authorities say were sprayed on using a small bottle or a water gun, occurred at the Neues Museum, the Alte Nationalgalerie, and the Pergamon Museum. Among the works that were attacked are ancient Egyptian sarcophagi, wooden and stone sculptures, and painting frames.

Officials declined to share more information on the composition of the substance thrown onto the works.

The incident was kept from the public for weeks as a tactical move, authorities said, but they declined to speculate as to whether conspiracy theorists incited the crime.

Some commentators have speculated that far-right extremists could be connected to the vandalism. Reporter Julius Geiler, who focuses on far-right extremism, tweeted that the vegan cookbook author and far-right conspiracy theorist Attila Hildmann, who called for the destruction of the Pergamon Museum this summer, could have incited the attacks. 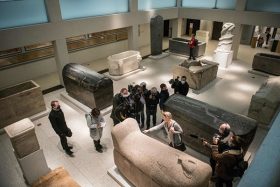 Friederike Seyfried, director of the Egyptian Museum Berlin, points to the damage caused by an “oily liquid” that left visible stains on exhibits in the Egyptian part of the Neues Museum. Photo: Stefanie Loos/AFP/Getty Images.

The incident has raised further questions about museum security in Germany, which has had a rash of high-profile robberies throughout the past several years.

Last year, thieves broke into Dresden’s Green Vault, burglarizing an assortment of diamonds and other jewels. An investigation is ongoing.

Three other suspects were sentenced to jail time in February for their involvement in the 2017 robbery of the Bode Museum, also on Museum Island, where thieves made off with a 99 percent pure gold Canadian coin valued at roughly €3.3 million ($4.3 million). The object was on loan from a private collector. Most of the works in the collection of the Berlin Museums are uninsured.

In a statement shared yesterday, German culture minister Monika Grütters asked for a comprehensive report on the attacks that took place this month, including an assessment of how similar events can be prevented in the future.

At a conference on museum security this fall, Grütters said that museums were insufficiently prepared for possible crimes.

But as commentators writing for the German national daily Die Zeit pointed out, museums and the country’s government are unlikely to be “comfortable” providing information about their own security in the wake of demands for restitution of artworks taken during the colonial era, “which are still being answered with the argument of alleged security problems in African countries.”