You are here: Home » Articles filed under: 'News' » Article: 'Art in museums is long – directorships are'

Art in museums is long – directorships are

April 3rd, 2021 | Browse other: News. | Tagged with: How the University’s Deaccession Symposium Got Compromised by Conflicts of Interest |

Although last week’s Syracuse Symposium was nominally about Deaccessioning After 2020, it was mostly focused on the new museum imperative—advancing DEIA (Diversity, Equity, Inclusion, Access) by any means possible, even at the cost of dismantling, monetizing and redefining the “permanent” collection to further those sociopolitical goals.

So what’s wrong with that?

For one thing, the central figures of this conclave (which I attended, in its entirety, via Zoom) had a professional interest in promoting aggressive deaccessioning (or “progressive deaccessioning,” as some, including symposium participant Glenn Adamson, would have it). The conference’s axe-to-grind mastermind (as attendees discovered at the start of the program) was attorney Mark Gold, best known in art circles for having provided legal counsel for two of the most deplorable deaccessions in recent memory—the Berkshire Museum disposals and the sale of the Everson Museum’s only Jackson Pollock painting. (Gold’s law firm is based in Pittsfield, MA, home of the Berkshire Museum.) 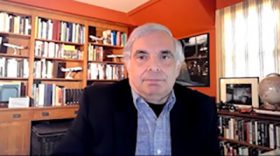 Craig Boise, dean and professor of law at Syracuse University, which hosted the symposium, introduced the proceedings by thanking Gold for “using his many connections [emphasis added] in the museum world to help pull the symposium together.”

As it happens, Boise himself is one of Gold’s “many connections”: The dean’s conference bio states that he is the Everson Museum board’s vice-chair. At the conclusion of the symposium, Boise indicated that Gold and done more than “use his many connections” in facilitating the conference. He had also “partnered” with Boise “in conceptualizing what [the symposium] might look like” (Boise’s words). 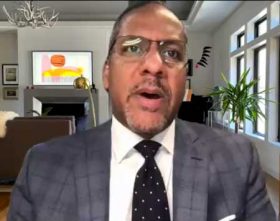 In part, the symposium “looks like” an advertisement for the kinds of deaccession-friendly legal services for which Gold has become known: Not only was he uniquely featured as a speaker on three of the conference’s panels (serving as moderator for one of them), but three other people who had relied on his advice were panelists, including two who are no longer at the institution they were discoursing on. (They nevertheless used the present tense in referring to their former work, mentioning only in passing that they had stepped down.)

Van Shields‘ conference bio (scroll down) says that he had left an earlier post “to direct the Berkshire Museum in 2011,” but fails to mention his departure in 2018. Elizabeth McGraw‘s bio does identify her as a “past board member and president of the Berkshire Museum.” Neither of that museum’s current principals—director Jeff Rodgers, president Ethan Klepetar—were participants in the conference. That said, Rodgers did talk about the capital improvements funded by the art-sale proceeds, for this Jan. 26 article in the Berkshire Eagle. The museum’s plans for its “Next Steps” are listed on its website, here. But this was accomplished by selling off some of the museum’s most beloved and valuable holdings.

Also included among the Syracuse speakers were the Everson’s director and CEO, Elizabeth Dunbar, and the museum’s current board president, Jessica Arb Danial. Although the Everson is in Syracuse, it is not affiliated with Syracuse University. That said, Syracuse Law School Dean Boise is also vice chair of the Everson’s board.

In defending the Everson’s controversial deaccession, director Dunbar speciously noted that “the Jackson Pollock—as wonderful a painting as it is—most people didn’t even know that we owned it. They do now, but at the time they were not aware of this painting.”

Better too late than never?

Keynote speaker Christopher Bedford, the embattled director of the Baltimore Museum of Art, was bloodied but unbowed after his reluctant capitulation to peer pressure: He said he had “elected not to sell three paintings [a Clyfford Still, Brice Marden and monumental Andy Warhol] in order to remain compliant with AAMD’s guidelines” (his words at the conference). [The links are mine, not Bedford’s.]

In his eloquent Syracuse address, Bedford was unrepentant about wanting to emphasize catering to the museum’s community over protecting its collection:

There are those of us in the most progressive end of the spectrum [emphasis added] who begin with the assumption that the most important thing a museum can nurture is in fact not its collection but rather its community, which includes its staff. Put differently, museums exist to serve the collections only insofar as those collections serve the needs and interests of their communities in the broadest and most diverse definition. 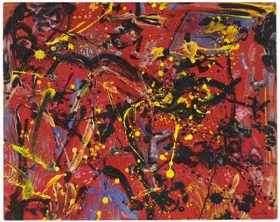 At the risk of causing those “at the most progressive end of the spectrum” to roll their eyes, let me quote the counterargument of someone “at the conservative end of the spectrum”: At Philippe de Montebello‘s Jan. 9, 2008 press conference, where he officially announced his plan to retire from his storied career as the consummate director of the Metropolitan Museum, I got a chance to engage him in a brief Q&A. A soundbite from that was broadcast the next day as part of my appraisal for New York Public Radio of his unusually long, highly productive 30-year Met directorship.

I had asked Philippe to enumerate the museum standards that, in his opinion, were most in need of defending. He began by asserting: “I would say the first is the primacy of art. We are not a ‘museum art.’ We are an ‘art museum.’ Art is first.”

He added the following (as you can hear in WNYC’s audio clip, beginning at 1:40):

Art is first. This was not just a clever statement, because many institutions actually, in many ways, have reversed the terms and have embraced as a primary part of their mission [emphasis added] “the museum experience,” in opposition to the experience of coming to look at a work of art. 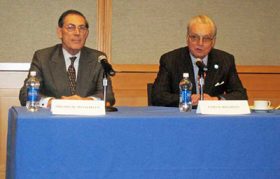 Philippe de Montebello at his Jan. 9, 2008 retirement press conference, with James Houghton, the Met’s then board chair. Photo by Lee Rosenbaum.

Today we are looking at a different kind of reversal: The new crop of museum directors and curators have embraced social and political progressiveness a “primary part of their mission” (to echo de Montebello’s words), even if that means sacrificing important artworks acquired by distinguished predecessors to bankroll acquisitions of works of the moment, catering to the tastes and predilections of a younger, more diverse constituency. Inclusivity and social relevance are laudable, essential goals, but require time and patience to implement responsibly, without trashing the time-honored achievements of past professionals.

Now that the Association of Art Museum Directors has opened the door (at least temporarily) to using deaccession proceeds for purposes other than acquisitions, it seems like almost anything goes: Instead of museum employees working in service of art, we now have (at some museums) art being used in service of the employees—unloaded at auction to help pay salaries, as decried in today’s Artnet opinion piece by Erik Neil, director and president of the Chrysler Museum of Art in Norfolk, VA. This expediency to address exigencies is now being contemplated even by de Montebello’s former institution, whose current leaders were conspicuously absent from the Syracuse Symposium, whether due to lack of an invitation or lack of a desire to participate in this fraught discussion.

My favorite analogy in defending the retention of museum-quality objects (as distinguished from those that are truly unworthy of institutional interest) is comparing the art in a museum to the books in a library: You don’t sell reader-worthy books that are already on the shelves because there are better ones, more current ones, more popular ones or more politically “woke” ones. All are worth preserving for historical perspective, scholarly study and public enjoyment. Another often-used analogy in deaccession debates is: “You don’t set a house on fire in order to heat it.”

Today’s ambitious directors and curators, eager to make their mark and fulfill their visions, should find ways to do so without overturning the expertise and contributions of yesterday’s professionals, even if those sometimes seem old-fashioned by today’s standards. If financial conditions make progress a slow process, so be it.

My Deaccession Dictim is: Art in Museums is Long. Museum Directorships Are Short.