May 12th, 2022 | Browse other: News. | Tagged with: Art industry response to climate change, Green is the New Black | 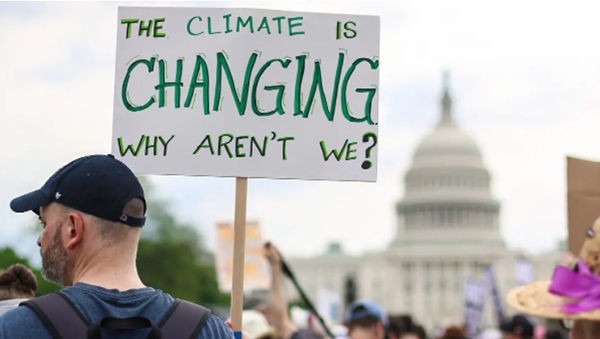 After decades of globe trotting and conspicuous consumption, the art world is finally embracing matters green—so where do we go from here?

Green is the New Black: a new column spotlighting the movers and shakers making the art world more environmentally sustainable, The Art Newspaper, May 2022

From industry-wide coalitions to individual initiatives, our correspondent Louisa Buck looks at how the art industry is responding to our climate and ecological crisis.

Green is the New Black might seem a rather facetious title for a column that covers how the art world is responding to our collective climate and environmental emergency. But I am also aware that, after decades of globe-trotting, private jet-hopping and conspicuous consumption, the art world’s recent embracing of matters green, while undoubtedly a positive, should also be viewed with a clear eye and a sometimes raised eyebrow.

Amid the current plethora of environmentally-themed exhibitions and initiatives, the aim of this column is to zero-in on what and who are actually making a tangible difference, rather than simply making a noise. These can be artists, organisations, or individuals. If our sector is going to play its part in averting the climate and ecological crisis, then actions rather than gestures are needed. Motives are always going to be mixed (this column is sponsored by a shipping company after all) but genuine outcomes and how they are being achieved are what I will be focusing on. 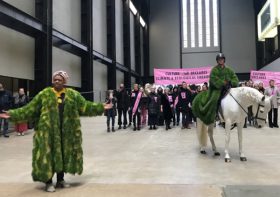 Culture Declares used grass coats and a white horse to beckon Tate’s declaration of a Climate Emergency in 2019. Courtesy of Louisa Buck.

Let’s look at where we are at so far. In the UK the public institutions have been the trail-blazers in considering the environment. As early as 2008 the then-Tate director Nicholas Serota delivered a paper to the Bizot Group of international gallery directors offering environmentally friendly guidelines for controlling museum environmental conditions. Encouraged by Culture Declares, an initiative co-founded by artists Heather Ackroyd and Dan Harvey, Tate then declared a Climate Emergency in 2019 and has since nailed its environmental colours to the mast by publishing a comprehensive Environmental Policy for 2021-3. Now Tate is well on the way to its target reduction of carbon emissions across all its buildings by 50% by 2023 and achieving net zero emissions by 2030.

In 2012, Arts Council England (ACE) became the first cultural body in the world to include environmental reporting and actionable outcomes in its long-term funding agreements with arts organisations. Now ACE insists that all its portfolio organisations submit their carbon data and have environmental action plans as a condition for funding. Beyond the UK, other proactive institutions include the Guggenheim, which in 2020 launched a Sustainability Leadership Team to implement environmentally friendly practices across all of its operations. This year Guggenheim Bilbao was the first museum in Spain to measure its carbon emissions and to publish a comprehensive sustainability plan across all its programmes and activities.

And now at last the commercial sector is starting to catch up. The Gallery Climate Coalition was launched in London in October 2020 by a voluntary group of gallerists and art professionals—including myself—to develop what we saw as a long overdue response to the growing climate and ecological crisis by our profligate, polluting industry. Now the GCC is an international registered charity with more than 800 members encompassing all aspects of the art world from big name commercial galleries, to small artist-run spaces, public museums and galleries; and from auction houses to artists and private individuals. As well as GCC London there are now volunteer teams operating in Berlin as well as across Italy and in Los Angeles, with New York in the pipeline and offers to form teams in Spain, Brazil and Japan. 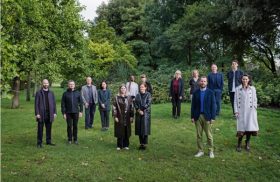 The core aim of the GCC is to provide the tools and recourses to facilitate a greener, more sustainable art world and specifically to reduce the sector’s carbon emissions by at least 50% by 2030 in line with the Paris Agreement. And to achieve zero waste. All GCC members have to commit to this 50% carbon reduction in their own operations, as well to addressing issues of wastage. To enable this, the GCC’s website offers a sector-specific carbon calculator as well as up to date advise on a range of issues such as shipping, travel, building management, packaging, recycling, offsetting and NFT’s. The emphasis is always on quantifiable action, with members encouraged to post their results. Many already have, from Thomas Dane in London to Jan Mot in Brussels and Hauser & Wirth in fourteen locations globally. The aim is for everyone to be calculating and acting-upon their carbon emissions and waste in the same way as they currently monitor their finances.

There are no winners or losers in a climate emergency, ultimately it affects us all. To this end, The GCC has joined forces with an international coalition of organisations within the visual arts under the umbrella title of PACT (Partners on Art and Climate Targets), all of which are engaged in supporting and accelerating the adoption of climate action, albeit via a number of different paths.

Other art market organisations have also recently started to step up to the environmental plate. These include Christie’s, which last year announced a Global Sustainability Initiative and were the first auction house to pledge to become net zero by 2030. The publishing of annual sustainability reports signals a willingness to by Christie’s subject themselves to scrutiny, and hopefully they will also take an active role in promoting a cleaner minting of the notoriously energy-hungry NFTs which are forming an increasingly conspicuous part of their business. 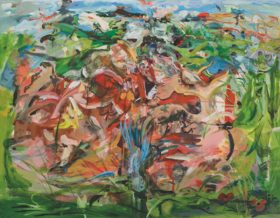 Cecily Brown’s There’ll be bluebirds (2019) was sold at Christie’s in a charity auction for ClientEarth. Courtesy of the artist and Thomas Dane Gallery. Photo: Genevieve Hanson.

The Covid-19 pandemic gave rise to a new collegiality within a notoriously competitive sector and hopefully this will endure once the art world fully swings back into business. This encouraging tendency to unite rather than divide has already manifested itself in a number of environmental initiatives. Last year Christie’s joined forces with the GCC to launch the Artists for ClientEarth auction series which so far has raised £5.5m for the Environmental charity ClientEarth, with Cecily Brown, Antony Gormley, Xie Nanxing and Rashid Johnson and their respective galleries: Thomas Dane, White Cube and Hauser & Wirth donating works for marquee sales across their various sites.

To reduce the notoriously high emissions generated by air freight, along with a business-savvy nod to skyrocketing air transport costs, Christie’s has also partnered with the fine art shippers Crozier to launch a new monthly sea route between London and New York, along with a bi-monthly sea service between London and Hong Kong. Each shipment offers Christies 60% of container space with the remainder for consolidated Crozier client shipments, and it remains to be seen if this action has a wider impact amongst shippers and insurers. 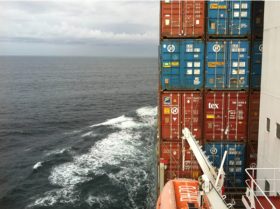 Shipping art by sea can reduce carbon emissions by around 96% compared to air freight.

It’s worth noting that much of the current conversations around shipping by sea as opposed to air were triggered by the artist Gary Hume who, in 2019 when he was having a show in New York commissioned a report on the impact of shipping the work from his studio in London by sea rather than air. This revealed that the carbon footprint was 96% lower than if the work had been flown as well as being considerably cheaper. Hume now stipulates that his work is always shipped by sea. This is just one of the ways – as various as the art itself – that a significant number of artists are increasingly revealing themselves to be formidable powerhouses in addressing climate and ecological emergency, and these endeavours need more highlighting.

Now that biennales, art fairs and international travel have returned, the need to balance urgent environmental concerns with navigating the practical realities of different art business and institutional operating models—not to mention creating art itself—is posing considerable challenges throughout our sector. How the art world, its infrastructure and the artists themselves, are grappling with these challenges is what I will be exploring here. Time is now of the essence, so let’s look at who is genuinely ringing the changes.