You are here: Home » Articles filed under: 'News' » Article: 'Art of Science' 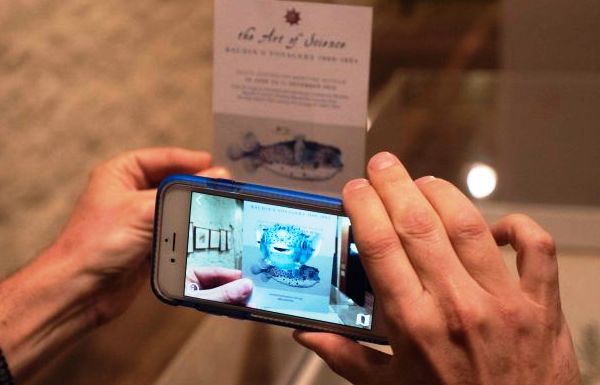 Augmented reality is being used to add another dimension to a new exhibition showing Australian animals drawn by French explorers in the early 1800s.

The Art of Science: Baudin’s Voyagers 1800-1804 is a collection of 50 works now showing at the South Australian Maritime Museum.

As camera phones are pointed to selected sketches in the display, the app launches 3D animations of the animals pictured.

App developer Oliver Scholey and curator Adam Paterson said the technology was a great way to introduce new audiences to the museum.

“In this case we have used the artwork to actually trigger the 3D animation,” Mr Scholey said.

The app brings to life sketches from the 1800-04 French scientific voyage around Australia led by explorer Nicolas Baudin.

The original sketches and paintings were created by the ship’s artists Charles-Alexandre Lesueur and Nicolas-Martin Petit to catalogue their discoveries.

Artworks which come to life in the app include a puffer fish, seal, jellyfish and frogs.

Museums around the world are embracing the technology to help reinvigorate historical displays.

“It provides a different way of engaging with museum objects and the stories that are told in the museum,” Mr Paterson said.

Just like Pokemon Go, Mr Scholey said adults were having just as much fun as the children with the augmented reality features.

“Their reactions were quite fun and engaging and it almost appeared like they were children, enjoying the experience as they were running from artwork to artwork.

“From what I understand, we may be the first to have done it in Adelaide, but I can see it becoming more and more popular.”