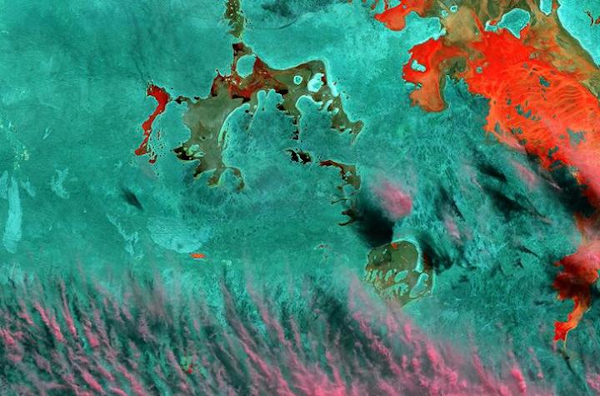 This visual music project set to the 2013 album ‘Open’ by Australian cult band The Necks combines time-lapse Landsat satellite imagery of Australia from Geoscience Australia’s Digital Earth Australia project and videography by Grayson Cooke together with aerial macro-photography of paintings by Emma Walker. The resulting work encapsulates the vastly different forms of aerial earth imaging to produce a complex picture of a changing planet.

The judges said of Grayson and Emma’s work:

The work is a synthesis of the Australian landscape and artistic practice. Both are examined individually and then woven together in such a skillful way as to make it challenging to distinguish which is landscape and which is art. The images are then bound further together by a mesmerizing soundtrack. By bringing natural science and art together so seamlessly makes this a worthy winner of the Waterhouse Natural Science Art Prize 2020.

When asked how it felt to be named the Open Category winner Grayson Cooke said winning this prize couldn’t be a more perfect accolade for this work with Emma Walker, adding it was not so much about winning this prize but the fact that Open Air had been given the honour of such recognition.

“Open Air captures the complexity and majesty of this extraordinary blue dot that we live on. Its resilience and its frailty and how imperative it is for us to value it, as our lives do depend on it. To stop taking it for granted and to revere and care for it. These are the imperatives of our times,” Emma Walker explained.

Associate Professor of Media at Southern Cross University Grayson Cooke reflected on the two-part inspiration behind this work. 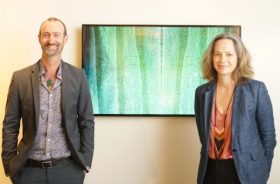 “Firstly, the project had a chance to do this intricate and close-up examination of Emma Walker’s amazing paintings and processes, and the idea of exploring them as topographies that reflect the Australian landscape at micro-scale. This then merged into the idea of time lapsing the Australian continent on a very large-scale using satellite imagery. Bringing these strands together and seeing their remarkable commonality was the huge joy of this project.”

Emma Walker said she was keen to get out of the solitude of her studio and work collaboratively with someone, so she jumped at the chance when Grayson suggested they film some of her paintings.

“It was all about experimentation and finding ways and ideas to invigorate my practice. Making this film with Grayson opened so many new possibilities and ideas. When I watched the final edit of the film, I had tears pouring down my cheeks, it was then I understood that somehow, we had made a thing of extraordinary beauty and potency,” Ms Walker said.

Dr Cooke added: “It’s about love for country, and about finding new ways to explore the forces that shape the Earth. We live on an ancient continent, and with every landform and river system we see millions of years of weathering, tens of thousands of years of care by Indigenous people, and modern environmental change as well, through urban expansion and industry. All of these forces bring Australia to its present moment – I hope that this project helps to realise an understanding of the continent’s toughness and fragility, and our responsibility to its future.”

The exhibition of all finalists in the Waterhouse Natural Science Art Prize opens at the South Australian Museum on Friday, 11 December – 8 March 2021.

The winners and highly commended works will then tour to the National Archives of Australia in Canberra.