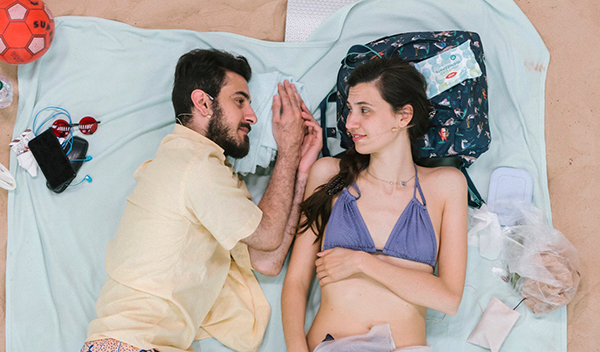 Performers in “Sun & Sea (Marina)” at the Venice Biennale’s Lithuanian pavilion on May 25. The pavilion won a Golden Lion for the opera, which runs in a loop for 8 hours every Saturday. Credit: Gianni Cipriano for The New York Times.

Elisabetta Povoledo, Their Beach Opera Won at the Biennale. But They Can Hardly Afford It, The New York Times, 31 May 2019

VENICE — In the minutes before a daylong performance of “Sun & Sea (Marina),” the Lithuanian opera that won the Golden Lion for best pavilion at this year’s Venice Biennale, the scene backstage was moderate mayhem.

Italians, Lithuanians, even two Americans — all volunteers — stripped out of street clothes to don bathing suits and pack beach bags with magazines, books, snacks and other essential seaside amenities. They had answered an online call for unpaid extras “to experience the artwork from the inside” at the Lithuanian pavilion.

Towels were distributed. Bathing suits were vetted. “Yes, great,” Rugile Barzdziukaite, the director, told one volunteer wearing a tan swimsuit. Other, more brightly-clothed bathers were told to change, picking out suits and towels from a pile of secondhand apparel.

Stepping out onto the beach, an artificially-lit seashore fashioned from 30 tons of sand inside a warehouse, the volunteers interspersed their towels among the dozen or so professional singers who would perform the 60-minute opera, composed by Lina Lapelyte with a libretto by Vaiva Grainyte, in a loop for the next eight hours.

Children scampered about, chasing balls, lobbing badminton birdies, building — and smashing — sand castles, mostly oblivious of the spectators looking on from a mezzanine above that gave a bird’s-eye view of the sunbathers and their operatic observations on human and environmental frailty.

Duets, choruses and sung soliloquies revealed the protagonists’ concerns about proliferating seaweed, sunscreens, consumerism, mass tourism and global warming — both causes and effects of the strain humanity is putting on the planet.

The Biennale’s international jury awarded the pavilion its top prize earlier this month, praising its “experimental spirit,” “inventive use of the venue,” and “engagement” with “Venice and its inhabitants.” Since then, the piece has become a must-see. Last weekend, a queue snaked along the narrow street leading to the pavilion.

But even after switching out the Lithuanian cast for local singers and extras, the production costs are such that performances are limited to Saturdays. During the rest of the week, the towel-strewn beach is a sound installation without any human activity: a reminder of the financial burden of producing performance art.

The piece was performed every day in the early stages of the Biennale, during the vernissage, as the preview before the official opening is known, when critics and collectors arrive in full force. But money was tight.

“Going into the vernissage week, we didn’t have enough money to guarantee us until the end of the Biennale, even performing once a week,” said Lucia Pietroiusti, the pavilion’s curator.

Having three or four rotating casts so that performances could be held every day was too expensive, she said.

Still, during the week, the empty pavilion sends out “a strong statement,” she said: “That performance art needs care and support that it doesn’t always get.”

A crowdfunding campaign launched before the Biennale got a boost from the Golden Lion win, putting the pavilion’s budget “on a more professional footing,” Ms. Pietroiusti said. She hoped enough money could be raised to add a midweek performance.

“A Wednesday performance is our maximum ambition,” she said.

The pavilion is not on the Biennale grounds. Instead, it is in an out-of-the-way quayside building that belongs to the Italian navy. The artists expected “maybe 15 visitors at a time,” and thought there would be none at some points, giving performers a chance to rest, Ms. Lapelyte said. With the surge in interest after winning the Golden Lion, the artists had to “reorganize the whole functioning and infrastructure,” she added.

The composer, director and librettist have known each other since they were teenagers growing up in Kaunas, Lithuania’s second most populated city. They never expected to win, but their victory didn’t come completely out of the blue.

Audiences at the opera’s 2017 Lithuanian debut and at performances last year in Dresden, Germany, responded well to the memorable score and the forceful — if subtly delivered — message about the earth’s precarious ecosystem. Before the Venice Biennale, the shows were standard, theatrical performances, though the opera had been conceived to run in a loop.

The idea for “Sun & Sea (Marina)” grew out of a visit to the Guggenheim Museum in New York, during a 2014 run of their previous collaborative project, “Have a Good Day!” Climbing the museum’s famed spiral ramp, the artists envisioned a drama playing out on the ground below, with spectators looking down on it.

“It was an image of a beach from above, and looking at people as a sort of species, not from an ordinary angle but from the same angle that you would look at bugs,” Ms. Barzdziukaite said.