May 20th, 2021 | Browse other: News. | Tagged with: Eating Your Way Through Art History, Maite Gomez-Rejón founder of Artbites | 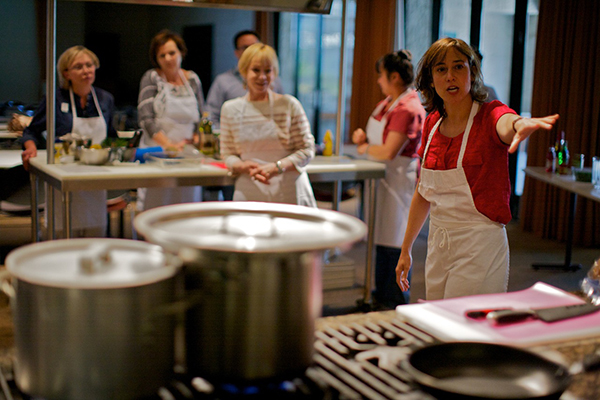 Anne Wallentine, Eating Your Way Through Art History, Hyperallergic, May 16, 2021

Maite Gomez-Rejón founded Artbites in 2007, sharing her combination of food and art history, including recipes inspired by historical works.

LOS ANGELES — While researching a medieval tapestry at the Metropolitan Museum of Art, Maite Gomez-Rejón had an epiphany. She was working for the museum’s education department when she came across a trove of medieval recipes and realized that food was just as much a part of history as art was: “It was this aha moment of, ‘these aren’t separate, people have always eaten,’” Gomez-Rejón said during a phone interview. That moment taught her that both creative mediums could provide exciting ways of accessing and understanding the past.

In 2007, Gomez-Rejón founded Artbites to share her combination of food and art history through classes, lectures, and workshops, in which she creates recipes inspired by historical works. Her skills span both fine and culinary arts, having earned first an MFA at the Art Institute of Chicago, followed by a diploma from the French Culinary Institute (now the International Culinary Center) in New York. 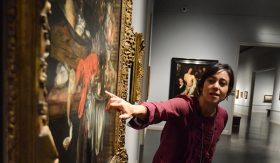 Maite Gomez-Rejón at the Los Angeles County Museum of Art (LACMA), after hours.

“The process of cooking … became my art,” Gomez-Rejón said. She began to incorporate food history into her tours at the Met, while also working in food and catering. Moving to Los Angeles for a job at the Getty, Gomez-Rejón continued her research about the intersections of art and food and convinced the museum to let her lead a cooking demonstration. After a rocky start involving “a makeshift kitchen with hot plates and a toaster oven,” the classes soon became so popular that they regularly sold out, and she decided to leave the museum to start Artbites. She has since taught programs at museums all over the US, including the Huntington, the Los Angeles County Museum of Art (LACMA), the Philadelphia Museum of Art, and the Met.

The early days, when many museums weren’t well equipped for cooking, presented a few challenges. “I’ve blown fuses at probably every museum in Southern California,” Gomez-Rejón said. Thirteen years on, things were running much more smoothly — until the interruption of COVID-19. 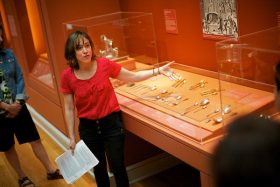 Maite Gomez-Rejón at the Huntington galleries.

During the pandemic, Gomez-Rejón shifted from leading in-person cooking classes to online sessions, partnering with museums and restaurants to provide programming that makes art education accessible as well as appetizing. In the inaugural “Cooking with LACMA” video, Gomez-Rejón made a mango-pineapple mezcal margarita inspired by the art of Rufino Tamayo. (She drew from Tamayo’s personal history — mezcal, like Tamayo, originated in Oaxaca — as well as his paintings “Woman with Fruit Basket (Mujer con canasta de frutas)” and “Man with Tall Hat (Hombre con sombrero alto),” which inspired the flavors and colors of the drink.) Gomez-Rejón has also collaborated with the Huntington on a video series inspired by the various aspects of their collections, creating an apple cobbler based on an 18th-century sampler, and a sorbet inspired by their avocado groves. Her recipes are not attempts to recreate the food from still lifes or paintings of banquets; instead, they’re about reinterpreting the art in another (extremely palatable) medium. Gomez-Rejón said that she “rarely look[s] at works of art that have food in them — most often, it’s more of an interpretation.”

Even when it comes to teaching historic recipes, as in a recent class on Mexico’s first female cookbook author, Vicenta Torres de Rubio, Gomez-Rejón is translating the history for the modern palate: “I take the stories, I take the ingredients, I take some of the herbs or spices used … and make my own contemporary interpretation.” 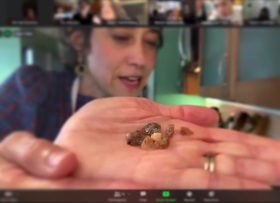 Gomez-Rejón’s classes cover a wide range of periods and cuisines, from the ancient to the contemporary. She has a special interest in Mexican history, her own family’s heritage, as well as in the history of colonization during the 16th and 17th centuries in France, Mexico, and Spain. In every culture, she is fascinated by “how the past is so present in the contemporary,” an idea she has emphasized in classes during the pandemic.

“I really think that [food and art] go together. Both can be very political, both really can tell a story of a time and place. So, it’s hard to look at one without the other,” Gomez-Rejón said.

Gomez-Rejón also sees “art and food as community building.” One of her current projects, a series with Lehigh University Art Gallery (LUAG), involves collaborating with local restaurants to both support businesses and facilitate better understanding of the gallery’s art: one recent class used a local café’s popular Cuban sandwich as an entry point into the Cuban and Cuban-American art in LUAG’s collection. This summer, the series will continue with family-oriented programs in English and Spanish that incorporate produce from local farmer’s markets. 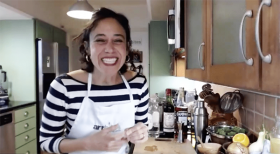 Gomez-Rejón is also planning a combination virtual and live event series this fall with Flavors from Afar, a restaurant and social enterprise in the Fairfax District whose chefs are former refugees. The restaurant is part of the Tiyya Foundation, which works to support refugees, immigrants, and displaced Indigenous communities. Gomez-Rejón hopes the series will showcase “food, culture, art, beauty” from each featured country.

“I like to create these experiences, and make something beautiful that tastes amazing, but more importantly bring people together,” Gomez-Rejón said. “I feel like I’ve really been able to create a sense of community through art and food, which is ultimately the goal.”

Traditional museums were founded on exclusionary, hierarchical principles of collecting. Even when their collections have contained broader narratives, they have often failed to prioritize those stories or tell them in relatable ways. “We need new ways of telling stories,” Gomez-Rejón said. “Food is a really great way to do that so that it’s much more welcoming.” But making museums more welcoming also goes beyond food. “Bringing in more women, more people of color, just more of the real world — just by doing that, that opens up the conversation,” Gomez- Rejón said.

The sensory exploration of art through food “makes for a more holistic picture” and is “the best way to engage an audience,” Gomez-Rejón said. There are “so many ways in — and the more ways in, the better understanding of not only that work of art, but of the entire time period.”

“Food isn’t art,” chef Ruth Reichl has said. “Cooking, however, can be.” Gomez-Rejón argues the same. “There’s so many different ways to be an artist,” she said. “Museums have to really embrace bringing all of the arts together.