You are here: Home » Articles filed under: 'News' » Article: 'Artist collaborates with 7,000 spiders' 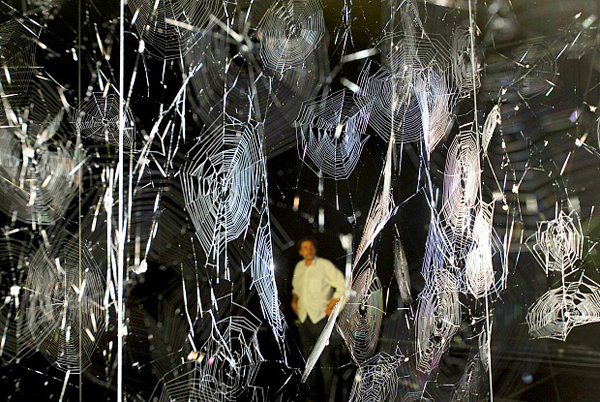 Arachnophobes look away now. The Argentinian artist Tomás Saraceno’s first show in a public institution in his home country, which opened this month, includes an installation of the largest spider web to have ever been exhibited. Made by around 7,000 spiders, the work titled Quasi-Social Musical Instrument IC 342 built by 7000 Parawixia bistriata—six months (2017), covers an area of more than 190 sq. m.

The piece is one of two large installations that form the exhibition How to Entangle the Universe in a Spider Web (until 27 August), which opened this month at the Museo de Arte Moderno de Buenos Aires. The particular species of spider used for the work—Parawixia bistriata—is “quasi-social”, Saraceno says; they “live together in a single web for only a period”. This type of behaviour is seen in less than 1% of arachnids.

The spiders worked together for around two-and-half months spinning their webs in the museum’s gallery to make the immersive installation. Once they had created it, they were gathered together again and taken back to where they were originally collected in the north of Argentina by the artist and colleagues in collaboration with staff from the Bernardino Rivadavia Natural Sciences Museum.

As well as the giant web installation, the show also includes a second immersive work where visitors can hear the sound that another species of spider—Nephila clavipes—makes when plucking its web. The work, titled The Cosmic Dust Spider Web Orchestra (2017), uses tiny microphones to amplify the spider’s movements. The work also includes live, three-dimensional video recordings that track 25 particles of dust in the air, lit by a beam of light, and translate their movement into sounds. These vary depending on where the particles are in relation to each other and how quickly they are moving. Among the particles in the air is cosmic dust, introduced by the artist into the museum space. The dust particles are above the speaker that is activated by the spider’s movements and, inevitably, by the movement of visitors in the gallery. “It is like a concert created by the spider, the dust and visitors,” the artist says.

Saraceno has one of the largest collections of spider webs in the world, and has worked extensively with researchers at the Massachusetts Institute of Technology in the US and the Department of Collective Behaviour at the Max Planck Institute in Germany.