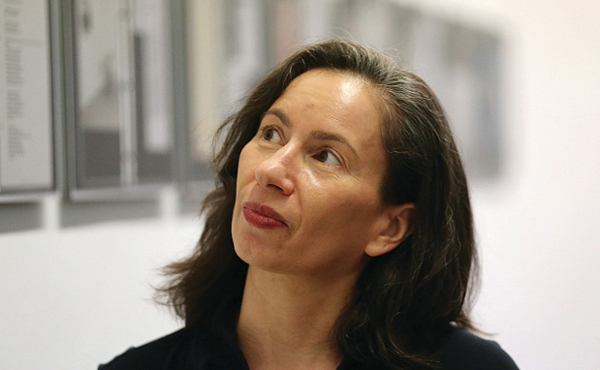 Andrea Fraser has returned to exploring the purpose and values of art institutions—a subject she addressed in a video in 1989. Photo: Oliver Berg/Epa/REX/Shutterstock.

The US artist Andrea Fraser is mapping the connections between major US museums and the political elite in an effort to expose institutions’ ties to the White House. Using information that is publicly available, she is documenting all political donations made in 2016 by museum patrons and trustees, many of whom contributed to Donald Trump’s election campaign. These gifts include the $1m donation to the Trump inauguration committee made by the financier Henry Kravis, whose wife serves as president of the Museum of Modern Art in New York.

“For me, the larger question about the relationship between museums, trustees and the political field has to do with plutocracy—the fact that the United States is now a plutocracy and that museums, in their origins, are a product of plutocracy,” Fraser said in a talk at the Artists Space gallery in New York last month. The artist will present the results of her research in a publication that is planned to resemble a phone book.

A professor at the University of California in Los Angeles, Fraser was part of a group of artists who petitioned the Museum of Contemporary Art, Los Angeles, to remove then treasury secretary nominee Steven Mnuchin from its board. The artists emailed the institution, decrying Mnuchin’s ties to predatory foreclosures and the Trump campaign, and threatened to go to the press if Mnuchin did not resign. In December, after his appointment had been confirmed, Mnuchin did step down, citing “a new workload as the reason”, according to the Los Angeles Times.

Fraser said at her talk last month that this was good, but “it felt like a missed opportunity” to have a discussion.

“There’s a seeming inconsistency between supporting a presidential candidate who in his attitude and policies seems to have a very negative attitude towards the arts” and sitting on the boards of major museums, said the collector Ethan Wagner, who will fund the project with his wife, the art adviser Thea Westreich Wagner. “We are like a lot of other people in the country today, looking for a way to express our outrage about the nature and the policies of our current president,” Westreich Wagner said.

Fraser’s project is ambitious in its research and scope, but Westreich Wagner said that the artist hopes to have the book published before the end of the year.

Positions Vacant » View All
» Bookings Officer – Sovereign Hill
» Shop Assistant – Western Australian Museum
Latest News » View All
AIATSIS to open Alice Springs engagement
& digitisation centre with NT Govt support Read more.
Eric Gill’s Prospero & Ariel at the BBC
- judging the past & Ditchling Museum Read more.
Art attack – when vandals strike
- a glimpse of past causes & art vandalism Read more.
A letter to MoAD’s visitors & friends
& road to recovery after arson attack Read more.
Museums among Aus’s most trusted orgs – CAMD
Mat Trinca, NMA ‘trusted sources of info’ Read more.
Top +
Council of Australasian Museum Directors, c/o Ms Daryl Karp, Museum of Australian Democracy at Old Parliament House PO Box 3934 Manuka, Australian Capital Territory 2603 Australia, © CAMD 2022
Copyright: All information and resources provided on this website remain the copyright of the Council of Australasian Museum Directors. Permission is granted for viewing and downloading for personal and not for profit purposes. Those wishing to reproduce any materials for commercial, educational or other uses are requested to contact us.
Disclaimer: The content of this website is provided for information purposes only and is not intended as a substitute for professional advice. No claim is made as to the accuracy or authenticity of the content of the website. The Council of Australasian Museum Directors does not accept any liability to any person for the information or advice (or the use of such information or advice) which is provided on this website. The information on our website is provided on the basis that all persons accessing the site undertake responsibility for assessing the relevance and accuracy of its content. No responsibility is taken for any information or services which may appear on any linked web sites. Hostgator.
.