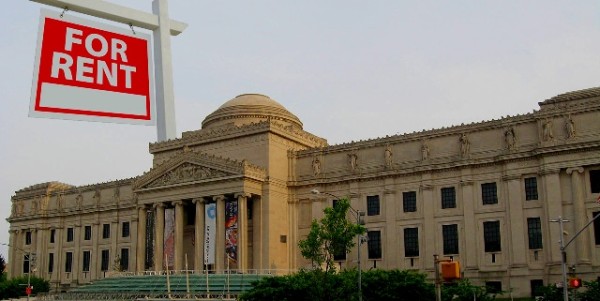 Illustration by Benjamin Sutton for Hyperallergic.

On November 17, the Brooklyn Museum will host the sixth annual Brooklyn Real Estate Summit, a gathering of more than 600 of the biggest players in Brooklyn’s real estate market who will seek to answer questions including “Which emerging areas are primed for transformation?” and “How can investors take advantage of demographic changes?” Now, less than two weeks before the event, the museum is facing growing backlash from those who find the decision by an arts institution to rent its space to those who contribute to mass displacement within NYC neighborhoods — including those of artist communities, as recent events have emphasized — hypocritical and reprehensible.

Yesterday, the Artist Studio Affordability Project (ASAP) and a number of local artists launched an online petition addressed to the museum’s new director, Anne Pasternak, and its board of trustees to protest their involvement. Although real estate agency GreenPearl is organizing the conference, the publicly funded museum has agreed to rent out its space for the one-day event, which, in exchange for a $500 registration fee, gives attendees access to keynote speeches and workshops, plus a break for a networking lunch, all of which is bookended by a networking breakfast and a networking cocktail reception.

“We feel that this event is using the very culture we create and support to endorse profit-driven investment,” the petition reads. “The mission of the Brooklyn Museum is to ‘act as a bridge between the rich artistic heritage of world cultures … to serve its diverse public as a dynamic, innovative, and welcoming center for learning through the visual arts.’ Yet the Real Estate Summit states it will teach attendees ‘how to create value in places like Crown Heights, Williamsburg, Park Slope, Downtown Brooklyn, where it seems values are already maxed out.’ As artists, critics, and writers, we cannot let this happen without speaking up and joining all the residents of Brooklyn who oppose the Summit.”

The petition has already garnered nearly 300 signatures. Many others have taken to addressing the museum directly on social media. Local artist and activist Sarah Quinter published her own open letter to the museum, in which she described the role of developers in driving gentrification as well as highlighted the brusque nature of particular workshop topics:

And sounding like hounds, workshop presenters ask, “Where is the bleeding edge of neighborhood transformation?” This language hints at the very real violence that gentrification incurs, sometimes actually resulting in blood being spilled. Notice the deliberate uptick in police enforcing racist “Broken Windows” policies in neighborhoods slated for “revitalization.” Consider the case of Alex Nieto, 28 year-old San Francisco native shot dead by police when a gentrifier called the cops on him for sitting on a park bench and “looking suspicious.” And of course, let us not forget that there are now 60,000 homeless New Yorkers, a number we have not seen since the Great Depression, and clearly correspondent with skyrocketing rents. Bleeding edges, indeed.

The participating presenters who will be exploring such questions include Brooklyn Borough President Eric Adams, former Nemw York Governor Eliot Spitzer, CEO of Mack Real Estate Group Richard Mack, and Alan Silver, acquisition director at Toll Brothers — the developer that used a prominent mural in a number of its advertisements without securing the permission of the artist. The building that housed that work was destroyed by Alloy Development to build the luxury “DUMBO Townhouses” — and representatives from Alloy will be speaking at the Brooklyn Museum as well. Brooklyn Anti-Gentrification Network (BAN), which has also been actively protesting the summit, is calling on Adams to decline participation in the event.