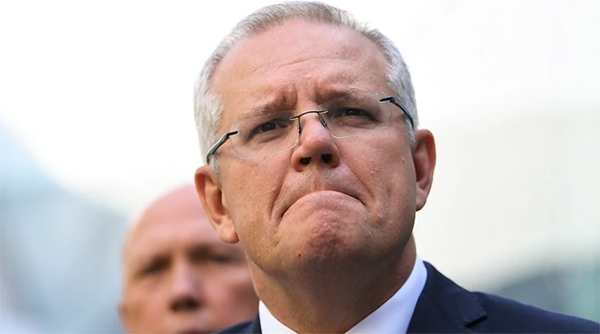 Scott Morrison speaks to the media on Friday. Source: AAP.

A battle of words between Australia’s arts community and Prime Minister Scott Morrison is taking shape.

The arts industry is mobilising against an “appalling” decision by Prime Minister Scott Morrison to axe the federal arts department.

On Thursday, Mr Morrison announced dramatic changes to the public service, cutting the number of departments from 18 to 14.

The current Department of Communications and the Arts is set to be scrapped.

Instead, Mr Morrison said arts will fall under the new Department of Infrastructure, Transport, Regional Development and Communications, which among other things will oversee road and rail. 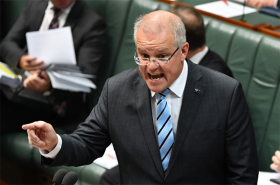 Prime Minister Scott Morrison during Question Time in the House of Representatives this week. AAP.

On Friday, Media, Entertainment and Arts Alliance chief executive Paul Murphy said, “this government’s disdain for the arts has reached a new low”.

“The absence of the word ‘arts’ from the new department’s title says it all,” he said.

“Artists and arts organisations and of all sizes are struggling in the wake of the 2015 Australia Council cuts, and there is widespread concern that this decision will foreshadow further cuts to arts funding next year.”

According to the government’s own figures, cultural and creative activity contributed $111.7 billion to Australia’s economy in a single year. 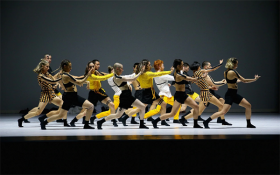 Cultural and creative activity contributed $111.7 billion to Australia’s economy in one year. Getty.

Since the news broke, people from across the arts industry have taken to social media. 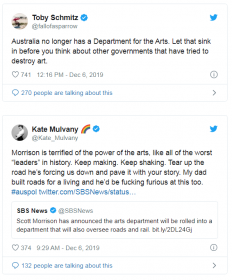 Those in the classical music space didn’t pull punches, with composer and chair of the Australia Ensemble Paul Stanhope asking “what more can these f*ckers do to us?”

Composer and performer Cat Hope encouraged the sector to “band together, write and phone your MP – activism works”.