You are here: Home » Articles filed under: 'News' » Article: 'Arts in Daily Life'

New Australia Council research shows 95 per cent of Australians have engaged with the arts in the past 12 months.

Australia Council Chief Executive Officer Tony Grybowski said The Arts in Daily Life: Australian Participation in the Arts survey released today told a great story about the way Australian’s engage with the arts, and their appreciation of its capacity to enrich their lives.

“The survey measured public attitudes and participation in the arts, both as consumers and creators. It is an example of the Council’s commitment to providing a stronger evidence base for how we understand and talk about arts and culture in Australia,” Mr Grybowski said.

“I am delighted that the report provides tangible evidence that the arts are an intrinsically important part of Australian’s lives.

“The 2013 findings are compared to those from the first iteration of the study conducted in 2009, and I’m pleased to say there have been positive changes in most categories.

“The survey covers visual arts and crafts, music, theatre, dance and literature, as well as community and Indigenous arts. It is particularly exciting to see more Australians valuing the central role Indigenous arts and culture play in our nation’s cultural fabric.”

Some of the key findings include:

“The research also demonstrates how important Australians consider the arts to a child’s development and how their engagement with the arts when young influences their participation as an adult,” Mr Grybowski said.

“It is a testament to the strength and vitality of Australian art and culture that not only are attitudes about the arts increasingly positive, but the depth of engagement has increased, with more Australians making art as well as being inspired by the work of others.

“The 2009 findings were widely referenced and we anticipate that this new report will also provide valuable insights for a broad set of stakeholders, as well as affirming the fundamental place the arts have in our lives.”

The research is based on interviews with a nationally representative sample of 3,000 people from around the country and was conducted in late 2013.

The Arts in Daily Life: Australian Participation in the Arts report and fact sheets can be found here.

For further commentary on the survey results see:

Ben Neutze, ‘Australians Love the Arts, But Will They Cough Up the Cash’ Crikey Daily Review, 5 June 2014 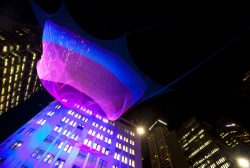 Janet Echelman's art installation, Tsunami, for Powerhouse Museum's Love Lace Exhibition. Source: Powerhouse Museum
Positions Vacant » View All
» Head, Visitor Experience – Queensland Museum
» Archivist – MAAS
Latest News » View All
ANMM’s Asst Dir appointed BGSA’s CE
Michael Harvey to change cultural instns Read more.
London’s Garden Museum on Constance Spry
& the fashion for flowers Read more.
European Museum of Year Awards announced
Winners of both 2021 & 2020 awards revealed Read more.
MV on Kofi Kindness – The Gratitude Journal
Kofi, MV & Office of Suburban Development Read more.
MV to receive $33.5M in State Budget
to deliver a new Gondwana Garden Read more.
Top +
Council of Australasian Museum Directors, c/o Ms Daryl Karp, Museum of Australian Democracy at Old Parliament House PO Box 3934 Manuka, Australian Capital Territory 2603 Australia, © CAMD 2021
Copyright: All information and resources provided on this website remain the copyright of the Council of Australasian Museum Directors. Permission is granted for viewing and downloading for personal and not for profit purposes. Those wishing to reproduce any materials for commercial, educational or other uses are requested to contact us.
Disclaimer: The content of this website is provided for information purposes only and is not intended as a substitute for professional advice. No claim is made as to the accuracy or authenticity of the content of the website. The Council of Australasian Museum Directors does not accept any liability to any person for the information or advice (or the use of such information or advice) which is provided on this website. The information on our website is provided on the basis that all persons accessing the site undertake responsibility for assessing the relevance and accuracy of its content. No responsibility is taken for any information or services which may appear on any linked web sites. Hostgator.
.