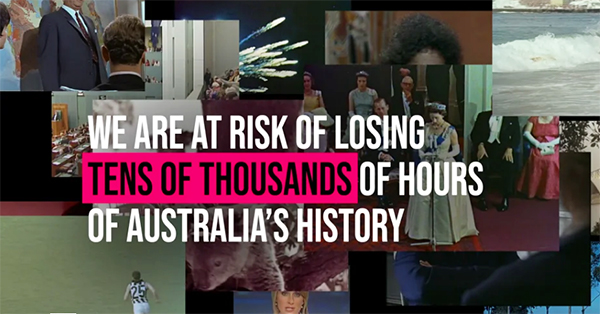 In 2015 the NFSA published Deadline 2025: Collections at Risk, warning that cultural heritage held on magnetic tape will in most cases be lost forever unless it is digitised by 2025.

Minister for Communications, Cyber Safety and the Arts the Hon. Paul Fletcher MP has announced that the NFSA will receive $5.5 million to support digitisation of at-risk audio and video in its collection.

The National Film and Sound Archive of Australia (NFSA) has received an additional $5.5 million in funding for the digitisation of the audiovisual heritage of the country.

The announcement was made today in Canberra by Minister for Communications, Cyber Safety and the Arts the Hon. Paul Fletcher MP.

In 2015 the NFSA published Deadline 2025: Collections at Risk, warning that cultural heritage held on magnetic tape will in most cases be lost forever unless it is digitised by 2025. This includes much-loved programs such as Young Talent Time and A Country Practice, and thousands of hours of television and radio.

This additional funding will allow the NFSA to achieve the digitisation of all audio and video magnetic tape, at the highest international archival standards, in time to meet Deadline 2025.

Chair of the NFSA Board, Gabrielle Trainor AO, said the NFSA was delighted to receive this funding boost which would help save irreplaceable recordings of our cultural heritage: “The NFSA is uniquely positioned at the intersection of Australian culture and digital technology and we thank the Minister and the Government for recognising the importance of rescuing this part of our collection that is at such high risk.”

NFSA CEO Jan Müller said: “I can’t express how excited we are about this significant investment in our cultural history.

“With this funding we will be able to save thousands of hours of radio, television and music, before the tapes that contain them become unplayable. By digitising the collection, we are not only preserving it for future generations; we are also making it more easily discoverable, accessible and re-usable.

“We will also be able to establish the National Centre for Excellence in Audiovisual Heritage – a hub for digitisation across Australia. We will share our skills, knowledge and equipment to safeguard the national audiovisual heritage held by other institutions. On behalf of all Australian collecting institutions, we are grateful for this funding boost and the opportunity to meet Deadline 2025.”

ABOUT MAGNETIC TAPE AND DEADLINE 2025

Magnetic tape is the now obsolete technology formerly used by the broadcast and music industries for the recording and storage of audiovisual productions (for example, radio and television programs and master recordings for music) during most of the second half of the 20th century. There are several tape formats that each require highly specialised playback equipment, for which spare parts are no longer available.

Content stored on magnetic tape is at risk due to three key factors: tape deterioration, obsolescence of equipment and loss of human expertise, as those who worked with these technologies approach retirement age.

Due to these factors there is consensus among audiovisual archives internationally that there is an imperative to digitise magnetic media before it is lost forever:  Deadline 2025.

The National Film and Sound Archive is Australia’s ‘living’ archive – the custodian of over 3 million items that we not only collect, but also preserve for future generations and share in many diverse ways.