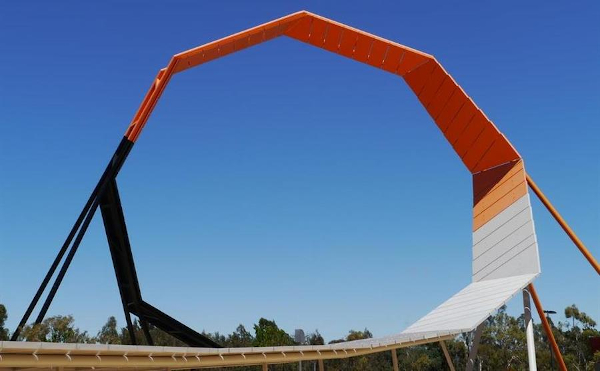 Going round and round, Australia voted down changing the definition of museums. Image the Uluru line at the National Museum of Australia, Shutterstock.

At the recent International Council of Museums (ICOM) in Kyoto, cultural institutions debated a new definition of museums that included social justice and equality. Miriam Cosic looks at how the Australian contingent voted.

Museums have been undergoing an identity crisis of late. Their definition has been overturned ever since women, marginalised people, former colonies and other groups have taken action against the Enlightenment view of museums as colonialist cabinets of curiosities. Based on material artefacts to tell the history of society, museum collections often included misused religious objects and even body parts – often without regard for the object’s owners or their culture.

The demand for the repatriation of looted artefacts has increasingly been acceded to by museums. Taking a new global view, modern museums work towards decolonising history and culture at all levels of collection, scholarship and exhibition. They operate on the principle that museums are inherently political (exemplified by the Twitter hashtag #MuseumsAreNotNeutral) , not disinterested scholarship, and must take on the role of interrogating history and possible futures.

In response to this, the International Council of Museums (ICOM) has been working on a new definition of the museum for three years. This month in Kyoto, the resulting proposal was put to the vote. After lively debate, 76% of the 119 countries represented voted for an indefinite postponement.

The idea had been to replace the previous 2007 wording, calling museums ‘non-profit, permanent institutions in the service of society’ with the traditional job of acquisition, conservation, scholarship and exhibition.

The new description was designed to bring the definition into the 21st century. The description read:

Museums … are participatory and transparent, and work in active partnership with and for diverse communities to collect, preserve, research, interpret, exhibit, and enhance understandings of the world, aiming to contribute to human dignity and social justice, global equality and planetary wellbeing.

This may seem like an obvious revision for our times, but the Australian delegation was among those who voted it down. The sticking point was its political dimension, but not for reasons of conservatism.

Australia’s opposition to the definition

Markus Schutenko, who was at ICOM’s general assembly, is the director of Darwin’s Museum and Gallery of the Northern Territory (MAGNT) which has a long tradition of championing Aboriginal and Torres Strait Islander art and is the hub of the annual NAATSIA awards.

He told ArtsHub that 83% of delegates there were from European museums, but there was no traditional consensus: the discussion was heated as well as inconclusive. He had a problem with the wording, he said, because it was exclusionary in a multicultural and globalised word.

He used the example of Chinese museums, which are mostly state-run and monitored by the government in a way we wouldn’t countenance in democratic societies. ‘Do we want a definition that will exclude them?’ Schutenko asks. ‘Or do we want to work with our Chinese colleagues?’

It is an argument that often crops up internally, though none of his curators would suggest giving space to intolerant or non-compassionate worldviews. ‘Just putting the show on implies we agree with their position without us telling visitors that this is how they too must think.’

Mathew Trinca, director of National Museum of Australia, is head of the Australian ICOM chapter. His speech was more diplomatic than Shutenko’s, but he too said the language of the Kyoto proposal was wrong. He critiques it differently: he said it was too opaque, too slippery, especially when many delegates are dealing with English or French as a second language. Some people, he said, took exception to the politics they imagined was there, including talk about the democratic function of museums.

‘Our position, broadly, was that while we would agree with the desire for change to definitions that better reflect the place of museums and their importance in contemporary society, we would choose simpler language to express some of those sentiments.’

On behalf of ICOM Australia, Trinca voted against postponing the change of definition ‘because I believed that the case for change was important, notwithstanding my concerns about language.’ The decision to postpone, however, was carried by the majority.

Art galleries not part of conversation

While museums encompass art, history, natural history and other themed institutions, Australia has split those institutions into museums and art galleries and formed different bodies to represent them. The Australian Kyoto delegation was exclusively made up of museum directors, but we know the state art galleries in Australia have a more unabashedly political voice, now supporting the voices of First Nations and women artists, for example.

On show on at the moment, Here We Are at the Art Gallery of NSW displays all the works by women artists aquired by the gallery since a 2015 change in policy designed to address the overwhelming majority of men in the permanent collection.

Rhana Devenport, who took over the Art Gallery of South Australia last year, was known as an activist at the Auckland Art Gallery. She came from a nation where Indigenous culture permeates and identifies the mainstream more widely than it does here and one that takes women in leadership more for granted than we do. The last acquisition she made in Auckland was the entire Guerilla Girls portfolio, around 200 works. She is unapologetic about the political nature of the art museums – or galleries, as we would call them – that she runs.

‘It’s our duty in museums to generate conversation and there’s still a lot to do,’ she told ArtsHub recently. ‘When survival and autonomy are still fundamental questions, it’s our responsibility to do all we can.’

Miriam Cosic is a journalist and author, and Arts and Literary editor of the Australian (1996-2012). She also wrote for The Sydney Morning Herald from1993-96, and is currently a freelance contributor to The Saturday Paper, The Monthly, The Guardian among others.

Born in Melbourne, she now lives in Sydney and is the author of Only Child (1999) and Right to Die: An Examination of the Euthanasia Debate (2003).