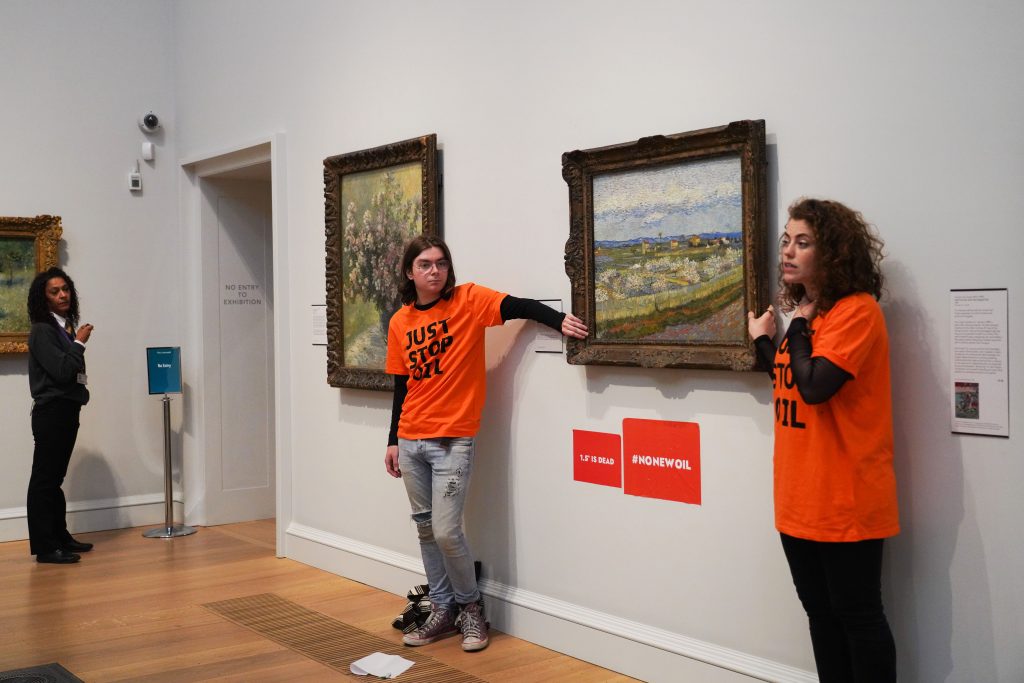 Vittoria Benzine, Here Is Every Artwork Attacked by Climate Activists This Year, From the ‘Mona Lisa’ to ‘Girl With a Pearl Earring’, 31 October 2022

Climate activists turned up the heat this year, decrying the global environmental crisis by targeting internationally renowned art museums’ greatest treasures—and leading many onlookers to wonder how their actions actually connect with the greater good. Just last week, protesters from Just Stop Oil glued themselves to Vermeer’s iconic Girl With a Pearl Earring in the latest of their ongoing art demonstrations, previously focused on the U.K.

The same group blasted a Rolex store in London with orange paint less than 24 hours later. In response to the mounting wave, France’s culture minister called on the country’s museums last week to “redouble their vigilance.” Guards at the Musée d’Orsay in Paris subsequently stopped a Just Stop Oil protestor from gluing and souping Van Gogh’s Self-portrait in Saint Remy this weekend, as soon as the protester removed her sweater to reveal Just Stop Oil’s signature white shirt beneath.

But Just Stop Oil isn’t acting in isolation. Their antics have been joined with demonstrations by Extinction Rebellion, Germany’s Letzte Generation, and Italy’s Ultima Generazione. (Although the last two groups’ names both mean “The Last Generation,” they’re apparently of no relation.) And some of these activists have received financial support from the likes of oil heiress Aileen Getty.

Gluing has proven, well, a reliable connection among these disparate activists’ public disruptions. Sometimes foods like tomato soup, mashed potatoes, and cake appear. Another common thread seems to be that activists are training their ire on historical rather than contemporary work. Just Stop Oil seems to favor pastoral paintings, while Ultima Generazione has targeted sculptures by Italian artists Botticelli and Boccioni.

Museum staff aren’t even the most outraged respondents. Normally, museum visitors verbally attack activists during their action. Louis McKechnie, one of two protestors who demonstrated on Van Gogh’s Peach Trees in Blossom, separately affixed himself to a soccer goalpost this year—and was assaulted by a sports fan. In July, Artnews spoke with Extinction Rebellion’s Simon Bramwell, who said employees at the Royal Academy understood their motives. Security guards joined them in singing, “There Ain’t No Mountain High Enough.”

After all, activists reason, what’s will the value of art be in the future if you can’t even eat?

Staging a spectacle before a famous artwork won’t reanimate wiped out animal species or force water levels to recede, but it might shake audiences free from our status quo. Some outlets liken these activists’ approach to The Situationists’ adage, “Sous les pavés, la plage!” (“Beneath the pavement, a beach”). Under entrenched rhythms lies the possibility for novel utopias.

Now that their collective modus operandi is becoming predictable, it’s also becoming its own kind of pavement. Here’s all the hottest climate protest art incidents from 2022 alone, before we all get too used to glue and force them to do something new. 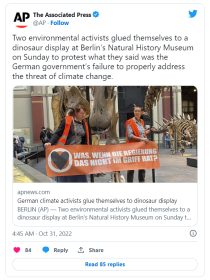 Two Letzte Generation protestors, Caris Connell and Solvig Schinkoethe, donned the group’s distinctive orange vests and glued themselves to surrounding handrails and supportive poles propping up an unidentified, four-legged dinosaur at Berlin’s Natural History Museum. Their free hands hoisted a matching orange banner that read “What if the government can’t handle it?” in German. “Unlike the dinosaurs, we hold our fate in our own hands,” Connell told onlookers. “Do we want to go extinct like the dinosaurs, or do we want to survive?” According to New York Post, it was 20 minutes until authorities arrived, and 40 until they were unglued. Both protestors have been charged with criminal trespassing and property damage. The dino itself is safe. 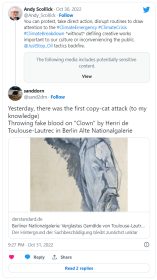 The same day as the dinosaur display incident, an apparently independent protestor at Berlin’s Alte Nationalgalerie broke from food and glue to spatter Henri de Toulouse-Lautrec’s Clown with fake blood, in what some have called a copycat case. The maverick even super glued their hand to the wall. ABCNews reported the activist was handing out leaflets before the attack, the contents of which haven’t yet been specified. The perpetrator was scraped off and taken into custody, while the artwork entered assessment. Hermann Parzinger, head of the Prussian Cultural Heritage Foundation, which oversees the museum, said the art itself appears to be fine, but the wall needs repairs.

October 27—Girl With a Pearl Earring by Johannes Vermeer 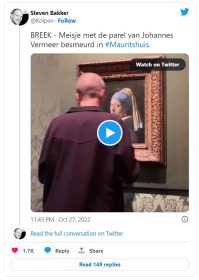 Two men in Just Stop Oil shirts approached Vermeer’s Girl With a Pearl Earring at the Mauritshuis museum in The Hague. One started gluing his shaved head to the work’s protected surface. “How do you feel when you see something beautiful and priceless apparently being destroyed before your eyes?” the other asked, after dumping tomato soup over his partner’s head. Onlookers chastised the pair, shouting “Shame on you” and more. “Where is that feeling when you see the planet being destroyed?” the vocal protester pressed. Both men were arrested. Officials at the Hague have said the painting is safe, and they’re considering further safety measures.