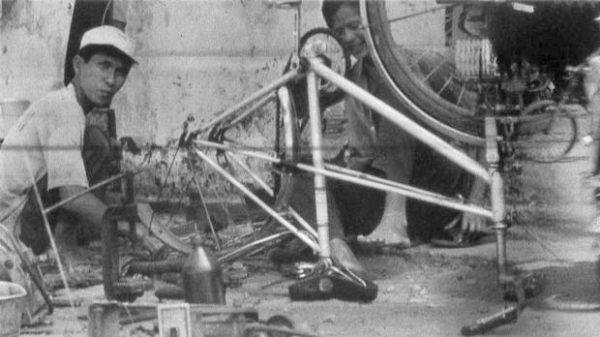 A work by Sydney artist Dacchi Dang, who was recently artist in residence at the Australian War Memorial in Canberra. Source: SMH.

Dacchi Dang was just 16 when he left his hometown of Saigon, folding himself into an 11-metre fishing boat and set sail for Malaysia in 1982.

With him were his two sisters, his brother and around 135 others, all crammed like sardines in the hold of a boat designed to carry four or five people, and all looking for a better life outside war-torn Vietnam.

Nearly 35 years later, Dang is still fascinated by the social upheaval that has led to the splintering of several different cultures, the blossoming of a new culture in his adopted homeland of Australia, and a generation of veterans from both countries, still living with their experiences on the battlefield.

As a teenager, he spent nine months in a Malaysian camp with his siblings, before being accepted as refugees to Australia.

He learnt English, finished high school and eventually completed a Bachelor of Fine Arts at the University of New South Wales.

His experiences, as well as the events that led to his traumatic journey to Australia and subsequent assimilation, are themes that arise constantly in his work as an artist.

He has just spent six weeks as an artist in residence at the Australian War Memorial in Canberra, which has commissioned him to create works informed by the relationship between Australian and South Vietnamese veterans.

The commission is the result of a bequest from retired Major John Milton Gillespie, a Vietnam veteran and immigration consultant.