You are here: Home » Articles filed under: 'News' » Article: 'Astronaut inspired by museum' 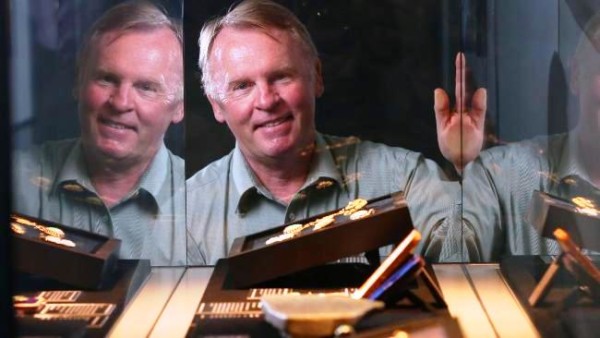 Precious stones are often described as out of this world, but there is one opal in particular that has actually made the trip outside the Earth’s atmosphere.

The 4.03ct Lightning Ridge solid black opal has been part of Adelaide’s Dr Andrew Thomas’ family for more than 115 years.

Dr Thomas, the first Australian-born NASA astronaut, who has ventured into space four times and now lives in the US, took the opal on his first space flight aboard the Shuttle Endeavour in May, 1996.

The Thomas family has lent the opal, set in a 9ct gold ring, to the South Australian Museum as part of its Opals exhibition.

“When you fly on the space shuttle you’re allowed to take personal artefacts into space with you and the opal was one of the pieces I wanted to take with me for my family,” Dr Thomas said.

“It has been in the family for a long time, it was originally my great-grandfather’s on my mother’s side. It was something I always remember from my childhood, so I thought it would be nice to fly it on my first flight.

“It’s done about four million miles (about 6.43 million kms) … I would say it is certainly the most well travelled opal in the world.”

He said the South Australian Museum was a big part of his drive to be an astronaut.

“When I was very young, we used to go the museum and it was always inspiring … it was a way of seeing the world without having to travel.

“To go to the museum was a great adventure, I was particularly captivated by space exhibits.”