The following article first appeared on the Atlas of Living Australia website.

One billion downloads and beyond

31 January, 2014
The Atlas of Living Australia reached a major milestone over the Australia Day Long Weekend, clocking up one billion downloads.The Atlas provides free, online access to over 41 million records of Australia’s biodiversity, with each record having been downloaded an average of 25 times.“Reaching a billion downloads shows us the value of data sharing: capture it once, make it freely available and share it many times,” says John La Salle, Director of the Atlas.

Screen shot of the Atladashboard on 26 January. Metrics around Atlas content and usage are available through the Atlas dashboard: <http://dashboard.ala.org.au>
“We have 690 data sets shared through the Atlas, contributed by museums, biological collections, individual collectors and community groups. These contributions enable the Atlas to deliver records of Australia’s biodiversity to scientists, policy makers, environmental managers and anyone interested in our unique flora and fauna”, he says.The records available through the Atlas are made up of specimens, observations made in the field, molecular data, literature, maps, sound recordings and photographs. They support research, environmental monitoring, conservation, planning, education and biosecurity.Over half of the billion downloads so far are directly supporting scientific research.

As part of research into refuges for biodiversity as climates change, the Australian National University’s Dan Rosauer looked at the diversity of lizards in eastern Australia’s rainforests.

“Using the Atlas, I was able to download records of relevant groups of lizards across eastern Australia,” Dan says. “The records were primarily what are known as vouchered specimens held in museum collections. It took me around half an hour, compared with the weeks and months I spent getting hold of similar records when I was researching frogs as part of my PhD around eight years ago.

“The Atlas is great because it lets us focus on the research question, instead of searching for and managing data. “And when we have data to share we know others will be able put it to good use.”

Reaching one billion downloads represents a major increase in usage of the Atlas, with an average of over 60 million records per month downloaded over the last six months. It shows that the Atlas is being used by an increasingly wide stakeholder community for a variety of research and applied outcomes.

“This is truly a remarkable achievement in data sharing,” says Ross Wilkinson from the Australian National Data Service. “The Atlas is an example of data re-use on a grand scale and shows the value of government investment in collaborative research infrastructure”.

Inspiring uses of Atlas can be seen among the Spatial Portal Case Studies, <http://www.ala.org.au/faq/spatial-portal/spatial-portal-case-studies/> including how to find the best location in Australia to produce your favourite wine, and how to choose a windfarm site that minimises harm to local bird and bat populations.

The Atlas of Living Australia is a partnership between CSIRO, Australia’s museums and herbaria, biological collections, research organisations, universities and government departments and is built on open source data and infrastructure.

Save the date, the Atlas of Living Australia’s annual Science Symposium <http://www.ala.org.au/blogs-news/save-the-date-atlas-of-living-australia-science-symposium-june-2014/> will be held on 11-12 June 2014 in Canberra. 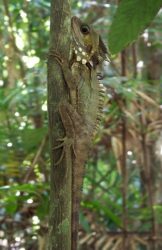 Anglehead Forest Dragon. Licence: CC-BY-SA-3.0, Source: Wikipedia, Author: Zoharby
Positions Vacant » View All
» Team Leader, First Peoples Art & Culture – TMAG
» Booking Services & Rostering Officer – SLM
Latest News » View All
Egyptians petition for BM to return
the Rosetta Stone Read more.
BM pledges ‘not to dismantle’ Parthenon
sculptures amid reports of talks with Greece Read more.
NHM to install life-size Titanosaur
cast The world’s largest dinosaur to fit (- just) Read more.
Gallerie d’Italia’s Art & Finance exhibition
- a long & mutually beneficial history Read more.
TMAG’s ‘Lost’ last Tasmanian tiger remains
found! ... cataloguing collections matters Read more.
Top +
Council of Australasian Museum Directors c/o Mr Brian Oldman, South Australian Museum PO Box 234 Adelaide, South Australia 5001 Australia, © CAMD 2022
Copyright: All information and resources provided on this website remain the copyright of the Council of Australasian Museum Directors. Permission is granted for viewing and downloading for personal and not for profit purposes. Those wishing to reproduce any materials for commercial, educational or other uses are requested to contact us.
Disclaimer: The content of this website is provided for information purposes only and is not intended as a substitute for professional advice. No claim is made as to the accuracy or authenticity of the content of the website. The Council of Australasian Museum Directors does not accept any liability to any person for the information or advice (or the use of such information or advice) which is provided on this website. The information on our website is provided on the basis that all persons accessing the site undertake responsibility for assessing the relevance and accuracy of its content. No responsibility is taken for any information or services which may appear on any linked web sites. Hostgator.
.