The New AR Invasion: Pokemon Go!, Center for the Future of Museums, 19 July 2016 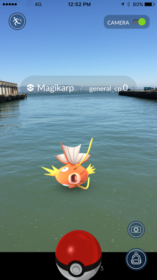 If you haven’t heard the buzz about Pokémon Go—the new augmented reality game taking the world by storm—well, you must have been locked in collections storage, with no internet access, for the last few weeks.

This new game was born from the collision of numerous trends, notably increasing sophistication of augmented reality, the ubiquity of internet connected hand-held devices, and continued growth of gaming—especially so called “serious games” with real world objectives. (The “serious” objectives for Pokémon Go and its sister game, Ingress, are encouraging people to be physically active, to get to know their neighborhoods and to socialize with other players.)

There have been dozens of articles and blog posts on Pokémon Go, already (I link to a few particularly interesting examples below), so I’m not going to go over the basics of the game. I do want to point your attention to how Pokémon Go illustrates the transformative power of another trend I’ve written about: how entrepreneurs are making use of museum resources to build their own products and services.

The digital landscapes of Pokémon Go and its older sibling, Ingress are built around real world landmarks—including historic markers, public art, museums, zoos, botanic gardens and historic houses. Niantic Labs, the creator of both games, started with Google Maps data (Niantic itself was born inside Google) and pulled in public data sets to prepopulate Ingress with “portals,” including public buildings like libraries, police and fire stations. In the early years of the game, it also encouraged players to nominate and annotate additional portals, encouraging them to focus on public art, historic buildings and notable community landmarks. Niantic imported many of the Ingress sites into Pokémon Go, as well as using geodata from crowdsourced sites such as the Historical Marker Data Base.