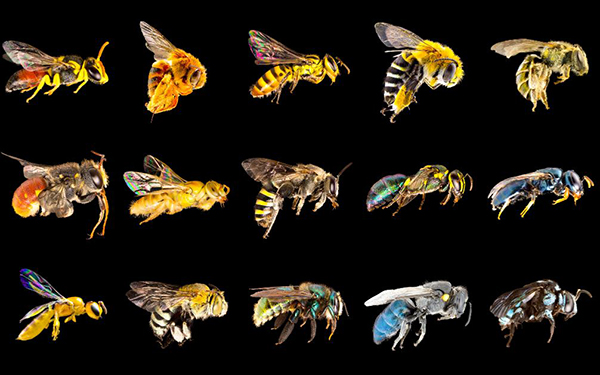 A selection of some of Australia’s hundreds of native bees. courtesy James Dorey Photography.

The number of threatened Australian native bee species is expected to increase by nearly  five times after the devastating Black Summer bushfires in 2019-20, according to new research led by Flinders University.

With 24 million hectares of Australia’s land area burnt, researchers say the casualties are clear among bee fauna and other insects and invertebrates after studying 553 species (about one-third of Australia’s known bee species) to assess the long-term environmental damage from the natural disaster.

“Our research is a call for action, from governments and policymakers, to immediately help these and other native populations most in danger,” says lead author Flinders University PhD candidate James Dorey, who is now a postdoctoral researcher at the Yale University Center for Biodiversity and Global Change.

Of the bees studied, nine species were assessed as Vulnerable and two more Endangered as a result of the multiple fire fronts in the 2019-20 bushfires that also destroyed approximately 3000 homes and killed or displaced an estimated 3 billion animals. 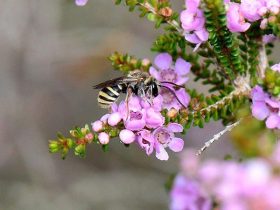 L gracilipes, one of the 11 bees identified as being at greater at risk in the new study. Photo courtesy Ken Walker, Museums Victoria (iNaturalist Australia),

The new study published in Global Change Biology warns widespread wildfire and forest fire damage is being repeated all around the world, from North America and Europe to the Congo and Asia, causing catastrophic impacts on biodiversity and sudden and marked reduction in population sizes of many species.

“In these circumstances, there is a need for government and land managers to respond more rapidly to implement priority conservation management actions for the most-affected species in order to help prevent extinctions,” says Mr Dorey. 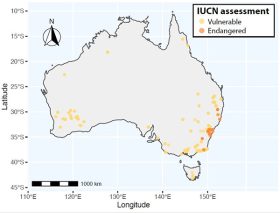 “Conserving insects and other less visible taxa should also be a factor in restoring and preserving some of the hundreds of bees that may not yet have been studied or recorded.”

He says the study forms a foundation for assessment of other taxa in Australia or on other continents where species are understudied and not registered on datasets or by the International Union for Conservation of Nature Red List of Threatened Species (IUCN Red List).

“Climate change is increasing the frequency of natural disasters like wildfire, which impacts our wildlife,” says fellow author Dr Stefan Caddy-Retalic, from The University of Adelaide and University of Sydney.

“Our study shows that we can assess the likely impact of natural disasters on poorly studied species, even when we can’t physically visit the field to do surveys.” 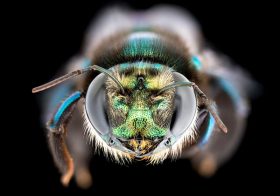 “Listing severely-impacted species on the IUCN red list and under Australian law represents our best approach to lobby governments to act,” he says, adding native bees are very important providers of ecosystem services including pollination, but most are poorly known.

“Most people aren’t aware of just how vulnerable our native bees are because they are not widely studied,” adds Flinders University researcher Olivia Davies, another of the 13 authors on the major paper. “The fact that no Australian bees are listed by the IUCN shows just how neglected these important species are.”

The study, which recommends 11 Australian bee species (just 2% of those analysed) as priority taxa for listing as IUCN Threatened species, also demonstrates a new model for “using the data we already have to understand how natural disasters are likely to impact key species and their ecosystems”.

“Being able to collect targeted data will always be the gold standard but we shouldn’t let data gaps stop us from acting to protect species we know are vulnerable,” Mr Dorey concludes. 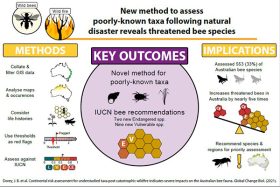 James Dorey is leaving Australia to take a post-doctoral position at Yale University’s Center for Biodiversity and Global Change to keep working on the macroecology and conservation of bees.