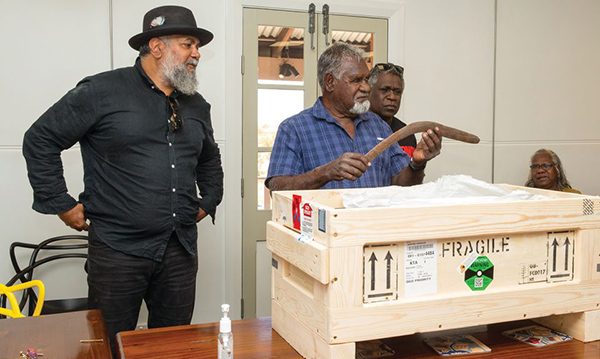 Eight objects were repatriated from a UK private collector to the Yindjibarndi people via the Australian government-funded project Return of Cultural Heritage Photo: Tangiora; © Ngaarda Media for AIATSIS.

The Australian government has committed A$10.1m ($7.2m) over four years from 2020-21 to support the return of Aboriginal and Torres Strait Islander cultural heritage overseas to traditional owners. The funding extends a A$2m ($1.4m) pilot project that was launched in 2018 by the Australian Institute of Aboriginal and Torres Strait Islander Studies (AIATSIS), a government agency, whose latest report reveals the scale of ambition held for repatriation in this field.

In 2018, the 250th anniversary of James Cook’s first voyage to Australia, “we wanted to help the nation understand that there was an Indigenous perspective on this history”, says Lyndall Ley, the executive director of the agency’s Return of Cultural Heritage project.

While the two-year pilot phase focused on objects in public collections outside the country, the project is now expanding to facilitate returns from private individuals, Ley says. Last month, a collector based in Andover, UK, made the first private repatriation through the scheme, returning eight secular items to the Yindjibarndi community of Western Australia. (AIATSIS supports the return of both secular and ceremonial material.)

“With collecting institutions a return can be a much longer process, whereas a private individual is already coming forward having made a decision. However, we are essentially waiting for the latter to hear about us, so there are complexities with both situations,” Ley adds.

Talks are at an early stage for further returns from a private collector in Sussex, England, the Israel Museum in Jerusalem and the Kluge-Ruhe Aboriginal Art Collection of the University of Virginia.

The AIATSIS Return of Cultural Heritage 2018-20 report, published in September, revealed that there are around 100,000 items of Aboriginal or Torres Strait Islander cultural heritage in overseas institutions. UK collections hold 33% of these objects, the largest share. Of the 199 institutions deemed to be holding relevant material, 83 are in the US and Canada, 55 are in Europe and 42 are in the UK.

Returns achieved during the pilot phase include 40 items from the Illinois State Museum in Springfield, and a similar number from Manchester Museum, both in 2019.

The project has also sought to: strengthen relationships between collecting institutions and traditional owners of Aboriginal material; create a database of overseas collections, due to launch in 2021; and involve Indigenous communities in negotiations for returns.

There’s a certain pride about their objects and culture being seen internationally, but still a desire for sovereignty
LYNDALL LEY, RETURN OF CULTURAL HERITAGE PROJECT

The drive to return Aboriginal cultural heritage comes at a key moment for the UK’s relationship with repatriation, in part because of Brexit and the need to recalibrate international relations. Earlier this year, Arts Council England commissioned the Institute of Art and Law to develop guidance on restitution and repatriation for UK museums, citing the “growing interest and debate” around the issue. Due to the pandemic, the guidelines have been delayed from this autumn to spring 2021.

In France, a 2018 report on the repatriation of African artefacts, commissioned by President Macron from academics Bénédicte Savoy and Felwine Sarr, recommended a bilateral approach to overseeing requests for returns. A subsequent bill, passed last month by the French National Assembly and awaiting approval from the Senate, lays the ground to return 27 colonial-era objects to Benin and Senegal.

However, despite growing pressure for returns, Ley emphasises the need to consider cases on an individual basis. “Not all communities want all objects back,” she says. “There’s a certain pride about their objects and culture being seen internationally, but still a desire for sovereignty, a chance to explain the [narrative] of items and ensure they are understood in their cultural context.”