October 12th, 2022 | Browse other: News. | Tagged with: Australia announces plan to halt extinction crisis and save 110 species, Towards Zero Extinctions | 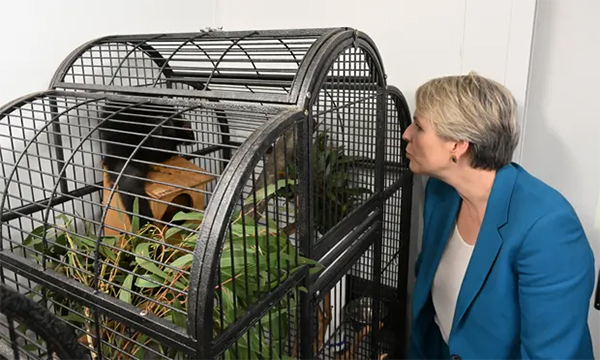 Priority targeting includes many of Australia’s best-known native animals but will also help others in the same habitats, environment minister says.

The federal government has set a goal to prevent any new extinctions of Australian wildlife.

It is the first time a federal government has announced a zero extinctions target for the country’s plants and animals. The goal forms part of a 10-year plan to improve the trajectory of 110 species and 20 places, and protect an additional 50m hectares of land and sea area by 2027.

The environment and water minister, Tanya Plibersek, said the government was setting “the strongest targets we’ve ever seen” to try to turn around the nature crisis documented in the State of the Environment report this year.

“Our current approach has not been working. If we keep doing what we’ve been doing, we’ll keep getting the same results,” she said.

The plan builds on a document released by the previous government and includes the Albanese government’s earlier commitment to ensure 30% of both land and sea areas are in conservation reserves by 2030.

Conservationists welcomed aspects of the plan, including clear objectives such as the zero extinctions target.

But they were critical that Australia’s threatened species strategy was still “picking winners” by identifying so-called priority species when almost 2,000 are listed as threatened under national laws.

The Australian Greens said the goals would be “unattainable” if governments continued to open new coal and gas reserves.

“It’s wonderful to see Australia join other developed countries, including New Zealand and members of the EU, in setting a target of zero new extinctions,” said Rachel Lowry, the chief conservation officer at WWF-Australia.

“Halting extinctions is achievable, particularly for a wealthy nation with science-based solutions.”

But Lowry said it was unclear how the plan would help non-priority species, such as the endangered greater glider.

“Australia has more than 1,900 listed threatened species. This plan picks 110 winners,” she said.

“Costed and time-bound recovery plans are essential for all threatened species. Otherwise we will see more native animals silently crossing the extinction line.”

She said this would require strengthening Australia’s national environmental laws, as recommended by a review led by the former competition watchdog head, Graeme Samuel, and more funding.

The government has promised a response to that review by the end of the year and has committed $224.5m for a saving native species program.

“We urge the government to include funding to halt extinction in this month’s federal budget.”

The new priority species include the critically endangered King Island scrubtit, while the new places include the Blue Mountains and the Australian Alps.

The plan is divided into targets focusing on specific issues such as species recovery, invasive species, habitat protection and climate change.

It includes targets to improve the trajectory of priority species and the condition of priority places, reducing the impact of feral cats and foxes on important habitat, “contemporary” approaches to conservation planning, and securing at least 80% of threatened plant species in insurance collections.

“Whilst zero extinctions is an incredibly important goal, the key test will be whether the decisions, reforms and funding commitments that are made by the government will get us there,” he said.

Speaking on the ABC’s Radio National on Tuesday morning, Plibersek said the plan was more ambitious and focused than previous iterations.

She said designating priority species did not mean other plants and animals would be overlooked.

“And if we focus on those species, we create a kind of halo effect for the whole ecosystem the plant or animal is part of.”

Euan Ritchie, a professor in wildlife ecology and conservation at Deakin University, said all levels of government would need to work together to prevent the underlying causes of environmental decline and species extinctions, including land clearing, invasive species and the ongoing reliance on fossil fuels.

He said the increased ambition in the plan was welcome but it still “falls well short of what will be required to arrest and turn around Australia’s biodiversity decline and extinction crisis”.

On Tuesday, the government also announced 15 new species, including the parma wallaby and the pretty beard orchid, and three ecological communities had been added to Australia’s threatened list.