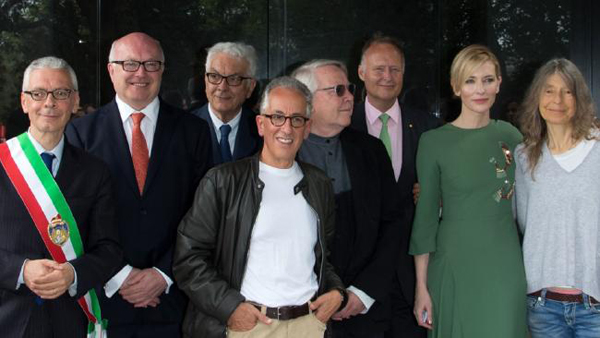 An enormous amount of goodwill, careful negotiation and painstaking preparation go into mounting an exhibition at the Venice Biennale.

It’s all about putting on the best show of ­Australian contemporary art in the city known as La Serenissima.

That serenity has been spectacularly punctured, however, with two major donors pulling their support from the 2019 exhibition amid a huge spat with the Australia Council. Simon Mordant and the Balnaves Foundation, whose contributions over the years amount to more than $3 million combined, are furious at changes the Australia Council has made to the Biennale commissioning model, which they say will produce subpar exhibitions and sideline passionate supporters. Hamish Balnaves doesn’t mince words: the Australia Council’s failure to consult key stakeholders, he says, has been reprehensible and misguided.

“As these changes will be to the detriment of Australia and its many great artists, the Balnaves Foundation will not be providing further funding to the Australia Council for the Venice Biennale,” he says.

Australia first exhibited at the Biennale in 1954 and in recent decades the council has managed our presence there. The federal agency owns the new Australian Pavilion that opened in 2015, but it was built mostly with private money: $6.5m from 80 donors, led by $2m from Simon and Catriona Mordant, and $1m from the federal government. Indeed, the Australia Council holds the Biennale to be an exemplary model of public-private partnership, bringing ­together “a remarkable group of philanthropic, corporate and ­government partners”.

Given that level of cash and goodwill, it’s extraordinary that the Australia Council has gone ahead with significant reforms without involving its major stakeholders. This is in an environment where the government-funded agency increasingly is seeking co-investment with the private ­sector to support particular programs. Mordant says he learned of the changes third-hand and ­approached the Australia Council for an explanation, before having conversations with chief executive Tony Grybowski and chairman Rupert Myer.

On the face of it, the Australia Council’s reforms are intended to ensure the commissioning model is fair and transparent. Previously an independent commissioner and expert panel would invite a small number of artists to make proposals for an exhibition at the Australian Pavilion: that is how Moffatt was selected for Venice this year. That discreet process now has been replaced with an open model, where all eligible artists and curators are able to submit expressions of interest. An “independent external selection panel” — to be chaired by Melbourne artist and academic Callum Morton for 2019 — then will choose the representative artist.

Details of the EOI were published yesterday. Artists and curators have until November 22 to submit their ideas. Shortlisted ­artists then will be invited to ­prepare a more detailed proposal, before the selected artist is ­announced in February.

Another change concerns the position of independent commissioner, an eminent art expert or patron who commissions the ­artist and leads the mission to Venice. (Milgrom was the commissioner this year; Mordant held the role in 2013 and 2015.) The change is due in part to a directive from La Biennale di Venezia that the commissioner be a government authority or delegated institution. Myer explains it this way: “There is a requirement now that the commissioner is either the government agency, or a person who is individually within the structure, but cannot be a ­contractor.” Prominent donors still can be involved through a new Venice Council that will spearhead the fundraising and advocacy campaign.

Myer says the changes have been made in the interests of transparency and contestability, and should not be read as a ­criticism of past exhibitions. But the Australia Council cannot be unaware of complaints by artist John Kelly about the “disproportionate representation” in Venice of artists from Sydney ­gallery Roslyn Oxley9. Since 2007, more than half of the selected artists have been associated with Oxley or with Melbourne gallery Anna Schwartz.

Mordant and Balnaves take issue with several aspects of the new arrangements. First, they say the expressions-of-interest model is unlikely to bring forward artists of the stature to represent Australia. Mordant says that while open applications are appropriate for the Australia Council’s grant programs, the Venice Biennale requires a more sensitive approach because high-calibre artists are “not going to respond to an ad”. He says an earlier proposal had a subcommittee of the Australia Council board choosing the ­Biennale artist. That model was replaced with the expert panel chaired by Morton.

Second, Mordant believes the Biennale requirements can be ­satisfied without sacrificing the role of commissioner: other nations with pavilions within the Giardini della Biennale have commissioners that are ­government bodies, individuals or institutions.

Third, the separation of artistic and advocacy roles, Mordant and Balnaves say, will not generate the passionate commitment and private funding that has been possible with a high-profile independent commissioner. Balnaves says the new model reduces prominent stakeholders to “cheque writers”, when they are the ones with the global contacts in the contemporary art scene. “You won’t get the same advocacy, or private individuals stumping up money,” he says. “The public-private partnership works because … it adds much more to the mix than funds. The government wants public-private partnerships, and I think they’ll end up breaking it.”

Mordant says he has no problem with attempts to finetune the Venice selection process. “But it’s critical that we get this right and I don’t believe that the intended changes were positive,” he says.

Myer says the Australia Council has had a positive response from the arts sector about the ­Biennale changes. He says Mordant and the Balnaves Foundation have been extraordinary supporters and he regrets their decision to withdraw funding.

“We would much prefer to have them as partners for what is one of the most important visual arts events in the world,” Myer says. “I hope that, in time, they may reconsider.”