You are here: Home » Articles filed under: 'News' » Article: 'Australia is cracking down on foreign'

Australia is cracking down on foreign 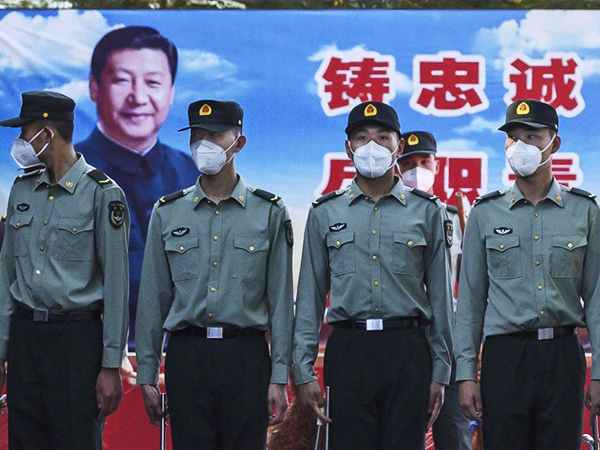 Some researchers are concerned about growing ties between China‘s military and its universities.Credit: Kevin Frayer/Getty.

Dyani Lewis, Australia is cracking down on foreign interference in research. Is the system working?, Nature, 10 August 2020

Pioneering guidelines aren’t enough to prevent overseas militaries such as China’s from co-opting the country’s science, say some experts.

Almost a year after Australia introduced a pioneering system for minimizing the risk of foreign interference in research, in particular from overseas militaries, experts are divided about whether it is working.

The new guidelines, which were introduced in November and are widely assumed to be a response to concerns about the Chinese military’s ties to universities, encourage institutions to perform risk assessments on potential collaborators, communicate the risk of foreign interference to staff and bolster cybersecurity. They also urge universities to ensure that they comply with laws that restrict exports of certain technologies, such as those that have military uses.

Although other countries, including the United States, the United Kingdom and Japan, are grappling with similar concerns, Australia is the first to set such a specific set of guidelines for its universities.

But some experts warn that Australia’s guidelines and export laws aren’t sufficient to help universities identify collaborations where research could lead to military applications. Although the guidelines outline ‘best practice’ steps that universities could take to mitigate risks, the measures are optional, says Alex Joske, a China analyst at the Australian Strategic Policy Institute, a think tank in Canberra.

Others question whether universities are up to the task of scrutinizing international partners, particularly those in China. The guidelines are “basically saying, do due diligence on your partner in an opaque authoritarian political system”, says Jeffrey Wilson, a political scientist at the think tank Perth USAsia Centre in Crawley, Australia. “You’re asking people to do something no one can do, except maybe a spy agency,” he says.

Others say the system is working well. James Laurenceson, director of the Australia–China Relations Institute at the University of Technology Sydney, says export controls on weapons and technologies that could have military uses, such as facial-recognition or cybersecurity software, reduce the risk of research being used by international armed forces. This is the right approach — focusing on the research, rather than who the collaboration is with, says Laurenceson. “Fundamental questions about the science being conducted — I think they’re more important ones for us to be asking,” he says.

On paper, China is Australia’s biggest research partner. In 2019, Australian researchers co-authored close to 14,000 papers with authors who had affiliations in China, according to an analysis by Laurenceson of papers indexed in the Scopus database. That’s 16.2% of Australia’s research output, more than for any other international partner nation. 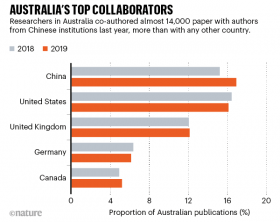 Fierce competition for limited government funds in Australia is driving collaborations, particularly with China, says Wilson, adding that this exacerbates the risk of interference. “One of the challenges for Australian universities is that they have been heavily incentivized to seek foreign research income,” he says.

But as China increases links between its civilian universities and the armed forces — a policy known as military–civil fusion — those links are becoming more difficult to identify, says Joske. Chinese universities, he says, “are more and more integrated with military assets, especially around research and development. They’re working on classified projects and a lot of their graduates are going into the military or the defence industry.”

In 2019, Joske and his colleagues developed the China Defence Universities Tracker, which places Chinese institutions on a risk scale according to how closely they are associated with the military and whether they have been accused of or engaged in espionage and intellectual-property theft.

Joske is concerned about collaborations with universities in China that have military ties — and how these should be policed. In his view, the Australian government should provide universities with information about which foreign institutions deserve more scrutiny, and should establish a national research-integrity office that can enforce existing national-security and export-control laws.

Some academics think that collaborations with military institutions should be ruled out entirely. “These universities are exceptionally important to the development of China’s military technology,” says Clive Hamilton, a public-policy researcher at Charles Sturt University in Canberra, who has investigated Chinese influence at Australian universities. “So why take the risk?”

The tracker also lists 12 state-owned defence-industry conglomerates, four of which have links to overseas universities.

One example of the kinds of relationships that are raising alarm is outlined by Joske in a 2019 report accompanying the tracker. The report noted that one of those conglomerates, the Commercial Aircraft Corporation of China (COMAC), signed a memorandum of understanding with Monash University in Melbourne in May 2017 to design 3D-printed aircraft components. The collaboration will also fund a Aus$10-million (US$7-million) Aeronautical Research Centre that will be established at the university, a spokesperson from the university said.

Joske says the collaboration is concerning because last year, the US cybersecurity company CrowdStrike accused COMAC of using technology stolen through cyberespionage from rival airlines to design its C919 commercial aircraft, which could be converted into a military surveillance aircraft. COMAC did not respond to Nature’s questions about the allegations.

But the university defended the partnership, saying it followed the Australian Code for the Responsible Conduct of Research and the university’s own policies and procedures. “The university regularly monitors advice provided by the government, intelligence agencies and the wider education sector, and acts in accordance with advice received,” the spokesperson said.

Several Australian institutions have made changes in response to the guidelines produced last year. Nature contacted the ‘Group of Eight’ leading research universities, and of the seven that responded, five said they had introduced new processes or were deciding whether to do so.

But some experts think that more needs to be done. The guidelines recommend that foreign affiliations and funding be recorded. Hamilton says universities should go a step further and make these registers public. “Transparency must be priority number one,” he says. “Australian universities are public institutions and I can see no reason why the public should not be permitted to know the affiliations and financial links academics may have with other organizations at home or abroad,” he says.

And he says the universities should take a hard line with researchers who fail to disclose foreign ties, including firing them in some cases. The government should also be stricter with universities, says Hamilton: “Universities that fail to heed government rules and guidelines concerning research links that jeopardize national security should be excluded from receiving funding from the Australian Research Council.”

In the United States, funding agencies have alerted institutions to grant recipients with potential undisclosed foreign ties. Investigations have led to dozens of researchers being sacked or forced to give back research funding.

But transparency has its limits, says Wilson. “We want to be transparent. But how do you deal with that when your research partner is fundamentally not?” he asks. Although information on connections to the military is openly available in some instances, he says, it could easily be hidden.

In June, the Australian government announced that it had created a new integrity unit to identify and analyse emerging threats to the quality of higher education, and assist universities to address foreign interference threats. It’s a positive move according to Joske, but will take time to prove that it is working.