You are here: Home » Articles filed under: 'News' » Article: 'Australia urged to sign up to protocols' 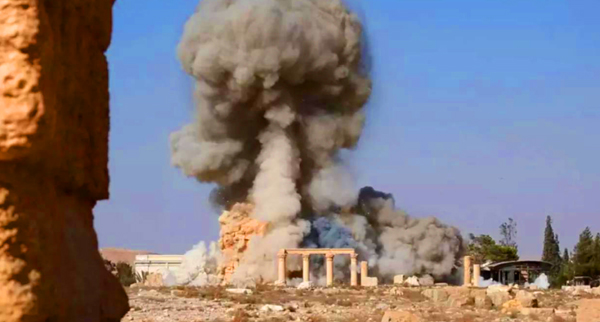 An explosion at Palmyra, Syria, during its occupation by the Islamic State militant group. Photo: Supplied by ICRC.

Neelima Choahan, Australia urged to sign up and help save the world’s cultural heritage, The Sydney Morning Herald, 22 March 2018

The antiquities dated back up to 9000 years.

But it took just two days for the marauders to steal the story of the beginning of human civilisation from Iraq.

It was the aftermath of the fall of Saddam Hussein. The US-led “coalition of the willing”, including Australia, had invaded in 2003 looking for weapons of mass destruction but failed to find any.

They also failed to protect what experts described as the cultural heritage of the world dating back to Mesopotamia.

As the US army stood by, looters stole more than 15,000 objects from the National Museum of Iraq, which housed among its treasures ancient Babylonian statues and 5000-year-old tablets bearing some of the earliest known writing.

Just a few weeks before hostilities broke out, cultural property expert Professor Peter Stone had been asked by Britain’s Ministry of Defence to help with the identification and protection of Iraq’s archaeological heritage.

Professor Stone says the mission failed partly due to a lack of foresight and desire by the military to make cultural property protection a priority.

Since then Professor Stone, who now holds the world’s first UNESCO chair in Cultural Property Protection and Peace at Newcastle University, has been an active voice urging governments to make cultural property protection an integral part of military training.

He visited Australia last month to urge Canberra to do its share and strengthen its commitment to protecting cultural heritage in times of war.

“For me, the evidence from the past is there to show that people have, in fact, far more in common then they do that differentiates them,” Professor Stone says.

“People have been trying to deal with the same things – the environment, their understanding of their place in the world, their understanding of god or gods – all of these things across the world and through time have been the same sort of issues that all communities … have been trying to grapple with and that in itself is such a remarkable part of the human story that it is a tragedy if we lose that evidence from any part of the world.”

After the large-scale destruction of cultural heritage during World War II, the world community came together and pledged not to target cultural property in conflict.

What resulted was the 1954 Hague Convention, to which Australia is a signatory.

But Australia has yet to sign either of the two protocols, which set out rules preventing the export of cultural objects and governing their return.

The second protocol, which has been signed by 75 countries, also requires nation-states to catalogue all of their cultural properties and have a plan in the event of conflict for their protection.

Next year will mark the second protocol’s 20th anniversary.

In 2017, Britain signed and ratified the Hague Convention and the two protocols. Professor Stone wants Australia to follow suit.

A Department of Foreign Affairs and Trade spokesman says the Australian government continues to consider accession to the two protocols, which involves consultation across government.

“Australia will only accede to the protocols once it is confident that it can comply with the obligations they establish,” he says.

“This requires careful analysis of the obligations that the protocols create and how these obligations could be incorporated into Australian law and practice.”

The Age understands there is no firm timeline for signing the protocols.

Modern warfare increasingly involves non-state actors such as Islamic State, who are not parties to international law.

But Professor Stone says that shouldn’t stop the international community from setting benchmarks for conduct in armed conflict, citing a 2011 case in Ras al-Marqab, Libya, where forces loyal to dictator Muammar Gaddafi stationed six mobile radar units close to a Roman fort, in the hopes of avoiding being targeted. All the vehicles were destroyed but the fort left intact thanks to precision weapons used by a forewarned NATO.

Professor Stone believes that such laws, once established, will catch up with even non-state combatants, pointing to the case of Ahmed al-Faqi al-Mahdi, who led a raid by Islamist militants on the city of Timbuktu in northern Mali in July 2012.