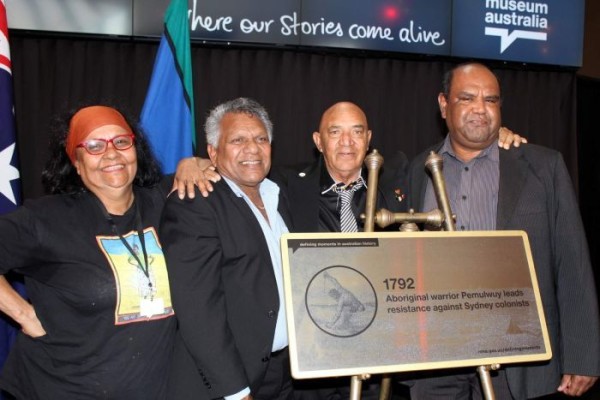 Aboriginal leader Pemulwuy’s campaign of resistance has been commemorated at the National Museum with the unveiling of a new plaque honouring his role in Australian history.

Pemulwuy was a member of the Bidjigal clan who led his people in guerrilla attacks on early English settlers in and around Sydney from 1792.

He was wounded at least twice and escaped from a prison hospital before finally being shot and killed in June 1802.

Pemulwuy’s head was removed and sent to England accompanied by a letter from Governor Philip Gidley King, who wrote: “Although a terrible pest to the colony, he was a brave and independent character”.

A turning point in history

Bidjigal elder Vic Simms said the museum’s official commemoration was a turning point in the history of Pemulwuy and the original inhabitants of Australia.

Photo: Pimbloy [Pemulwuy]: Native of New Holland in a Canoe of that Country 1804 by SJ Neele. (Supplied: State Library of New South Wales).

“It means a lot to us, and me in particular, that at last there’s a true recognition of a true hero in Aboriginal folklore and history,” he said.

The National Museum is collaborating with the British Ministry for the Arts to try to uncover Pemulwuy’s remains and repatriate them to Australia.

The campaign was boosted in 2010 when Prince William promised to help in the search.

Education Minister Christopher Pyne, who has taken up the cause, wants the British Natural History Museum to speed up the process.

“We are working hard on it,” he said.

“They are finding it difficult to identify Pemulwuy’s skull because of the bombing of the College of Surgeons in London in 1941 and they’re not sure exactly of the provenance of all the various skulls and so on they have.

“But my suggestion to them is to send them all back and we’ll take care of that for them.”

Mr Simms has also pleaded for the return for Pemulwuy’s remains.

“Bring his spirit back to the Bidjigal people of the Botany Bay area who he fought and died for,” he said.

The commemoration of Pemulwuy’s life is part of the National Museum’s Defining Moments project.

“Pemulwuy’s daring leadership impressed enemies and comrades alike and the story of his concerted campaign of resistance against British colonists should be more widely known,” Dr Trinca said.