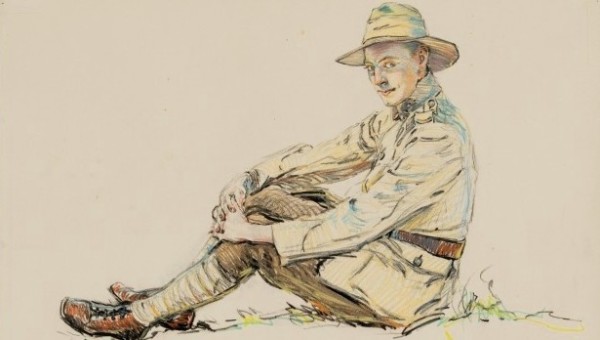 The Australian Government has announced funding of $100,000 from the National Cultural Heritage Account for the purchase of a collection of nine drawings of First World War soldiers, 1922 by Hilda Rix Nicholas, unveiled at the Australian War Memorial today.

Senator Brandis said the acquisition is particularly significant in light of this year’s commemorations of the Centenary of ANZAC.

“This rare and important collection of portraits will give audiences an insight into the personal experiences of Australians in the First World War,” Mr Brandis said.

Rix Nicholas explored themes of grief and war via her art. These nine drawings are the only known surviving portraits of soldiers created by a leading Australian female artist during the First World War. As Australia did not appoint a woman as an official war artist until the Second World War, this collection is the most significant body of First World War related work by a female Australian artist.

Senator Ronaldson said Rix Nicholas set out to create art that expressed national sentiment around the loss of Australians during the First World War.

Among the drawings are two intimate portraits of Rix Nicholas’s husband, Major George ‘Matson’ Nicholas, who was killed in action just five weeks after their wedding. Other portraits depict Major Nicholas’s brothers, providing an insight into the close relationship the artist developed with her late husband’s family as well as the character and personalities of Australian soldiers.

Each year $500,000 is allocated to the National Cultural Heritage Account to assist national, state, regional and non-profit cultural institutions to acquire nationally significant objects that they otherwise could not afford ensuring that they remain in Australia and available to the public.

The Queen Victoria Museum and Art Gallery received $200,000 towards the purchase of a very rare Tangyes “Otto” Stationary Engine.

Objects acquired with the support of the Account are assessed for their cultural significance to Australia before funding is approved by the Minister.

More information about the National Cultural Heritage Account can be found on the Ministry for the Arts website.