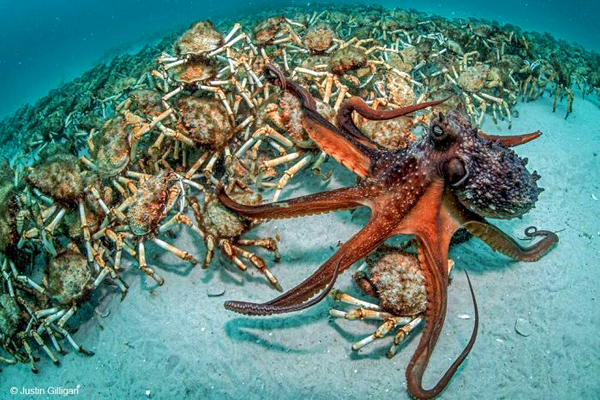 A fluke picture of a cast of spider crabs and a predatory octopus has clinched its owner the 2017 Australian Geographic Nature Photographer of the Year prize.

Justin Gilligan snapped the photo at Mercury Passage, between Maria Island and the Tasmanian coast.

“I wish I could say it took weeks of planning and days in the field to capture the shot but with this image I was fortunate it was a total surprise,” he said.

“[It was] a completely unexpected encounter with a group of hundreds of spider crabs, down off Tasmania.

“In their midst was a giant Maori octopus, which is the largest species of octopus in the southern hemisphere.

Some of the other winners include Jennie Stock’s photo of a windblown egret, Scott Portelli’s shot of green turtles devouring a giant jellyfish, and Julie Fletcher’s aerial landscape.

“I’m constantly amazed at the calibre of entries we receive and Mr Gilligan’s winning entry is yet another example of the role this competition plays in connecting people with the natural world in which we live.”