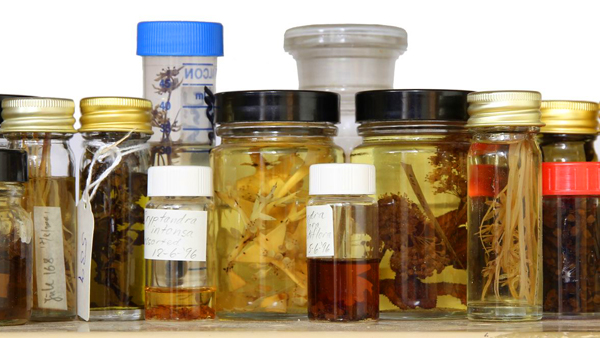 Although unfortunate, the incident has focused attention on the importance of being able to share scientific specimens around the world, and the vital role that herbaria play in modern science.

The modern herbarium is steeped in tradition and full of antiquities, but it also leads the application of modern approaches to understanding our past, present and future natural world.

The power of 8 million specimens

If you tell someone that you work at a herbarium, most will ask “what’s that?”, or perhaps “oh, what kind of herbs do you grow there?”.

Conventionally, a herbarium is a collection of preserved plant specimens that are stored and managed in an organised and structured way by curators and botanists who specialise in plant taxonomy and systematics.

There are some 3,000 active herbaria worldwide. As a collective, they contain more than 380 million specimens, spanning collections dating back as far as 500 years ago.

Herbarium specimens exist in many forms, including “pickled” plants or plant parts such as flowers or other delicate structures, dried specimens still attached to the surface on which they grew (like tree bark and rocks), and fruits or seeds preserved whole. But the overwhelming majority are dried, pressed plant specimens attached to archival card. Alongside these specimens there are sometimes drawings, paintings or photographs of the species, which capture details that are not discernible in the preserved specimen.

In Australia, the major herbaria have been actively adding this information into a digital repository, resulting in a world-leading dataset: the Australasian Virtual Herbarium.

The collation of these resources helped to inspire the development of the Atlas of Living Australia, and gives anyone with an internet connection access to specimen records from around Australia and the world.

Specimen-based, online data sets provide evidence of what species are found in a particular place at a particular time. They are a direct link from the presence of a species in the field, to collections of physical specimens held in herbaria, with the current name (that is, the latest changes in taxonomy) for that specimen.

The Council of Australasian Herbaria (CHAH), the peak body representing the herbarium community of Australia and New Zealand, deeply regrets the destruction of two loans recently sent to Australia from our international colleagues. We understand and agree with the significant concerns our fellow institutions around the world have. We acknowledge the impact the destruction of scientific specimens may have on collections-based science in Australia, and around the world, however, loans of specimens have always been an essential part of our science and we see it continuing in the future. We are diligently working towards resolving the concerns about how specimens are processed through biosecurity control upon arrival in Australia, and seek to reassure our colleagues and collaborators around the world that the events that occurred were unusual and protocols are in place (and currently under review) to prevent future recurrences.

Australia has long had strict biosecurity controls to protect our natural resources and agriculture. The Australian herbarium community absolutely supports these restrictions in principle. We have worked closely with the Australian Department of Agriculture and Water Resources (DAWR) (and its predecessors) over many years in developing documentation, processing procedures and practices that ensure compliance with biosecurity controls of herbarium specimens imported into Australia.

Biosecurity controls not only protect our country, but also our herbarium collections. Australian herbaria are front line supporters of strong biosecurity control, providing taxonomic and other specialist advice to biosecurity assessors and policy makers. We have institutional protocols and processes in place to minimise any potential biosecurity risks posed by our specimens and collections and we have reassured the DAWR that these protocols and processes are enacted. There are no known instances of seeds or pathogens escaping from an Australian herbarium over the last 170 years.

We wish to emphasise to our colleagues around the world that the DAWR Biosecurity Import Conditions (BICON) database does recognise the low biosecurity risk posed by herbarium specimens however we still must comply with various import conditions. If import conditions are not met, the ‘Onshore Outcomes’ are such that destruction of herbarium specimens is not an option. This is the ongoing basis by which we advise international herbaria when sending material to Australia.

As with all consignments arriving in Australia, herbarium specimens may be seized by the quarantine inspection agency (DAWR) if import requirements are not met (e.g. because the documentation is incomplete) or biosecurity officers have raised a query. In such cases DAWR notifies the receiving institution by mail and allows 30 days for a response. Herbaria are usually able to rapidly provide a satisfactory response, but if not the consignment may be treated or exported back to the sender, but not destroyed.

To assist our international colleagues in meeting Australia’s biosecurity requirements, CHAH herbaria have developed standard templates of the documentation required for importing herbarium specimens into Australia. We urge all institutions to contact relevant Australian herbaria before sending any material to Australia. We are presently reviewing these documents as part of ongoing discussions with DAWR to ensure the future safe transit of herbarium specimens into Australia.

We appreciate your awareness, support and patience as we work towards resolution of this issue.

Michelle Waycott
Head of Council of Heads of Australasian Herbaria