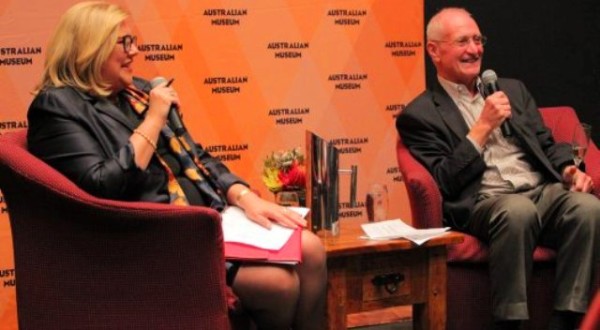 The Award recognises a lifetime of advancing public knowledge and understanding of science.

‘The Australian Museum is my favourite scientific institution bar none: its history, importance and, above all, its people are magnificent. An award from the Oz Muz is as good as it gets’, Robyn said.

Robyn has presented ABC Radio National’s The Science Show since August 1975 and has a long association with the Museum. He joined the Trust in 1984 and became President in 1986, a position he held for eight years. In 1990, he initiated the Australian Museum Eureka Prizes.

As part of the award, Robyn delivered the annual AMRI Address, speaking about many of the animals, plants and people featured on The Science Show over a record 40-year period.

‘Robyn’s ability to communicate what we do, make it fun, engaging and digestible is unparalleled’, said AMRI Director Dr Rebecca Johnson.

This is only the second time that the AMRI Lifetime Achievement Award has been given, with former Australian Museum research scientist Professor Tim Flannery receiving the inaugural award in 2014.

Video of the speech can be seen here.