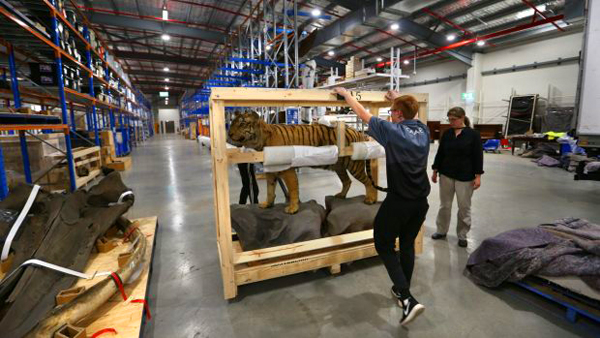 The hairy rhino is rolled out last of all the beasts from the back of the truck, then dispatched across the polished concrete floor. Every creature has its place in the scheme of things. Here, at the Australian Museum’the stuffed Sumatran rhinoceros slots in neatly near a Komodo dragon and wallaroo.

The Castle Hill warehouse resembles a Noah’s Ark menagerie, without all that God stuff and two-by-two. Lions watch over lambs, seals sit near stoats, near badgers, near a reclining red kangaroo. Shelves are loaded with whale bones and plastic-wrapped baby leopards. Trolley-loads of specimens deliver new discoveries: marbled quails, black-tailed godwits, a Pondicherry partridge or two.

“I’ve been moving stuff up and down the east coast for years and I’ve never seen anything like this,” remarks a removalist, after a close encounter with a tiger. “I move office furniture, mostly.”

Close to 250,000 specimens that don’t fit within the museum’s city site are filling its first custom-built off-site storage facility, under a joint venture between the Australian Museum, the Museum of Applied Arts and Science, and Sydney Living Museums. The government-funded Castle Hill site, at the Museums Discovery Centre, contains collections from all three museums.