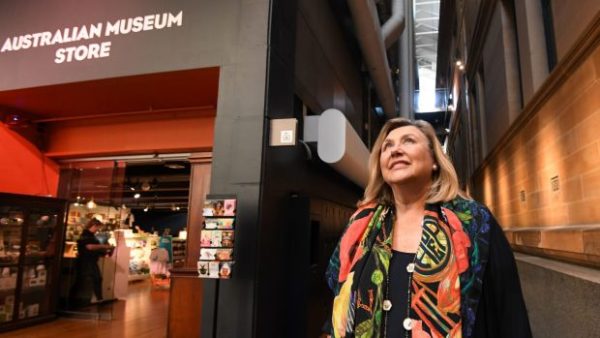 Australian Museum’s CEO Kim McKay in the area that will be transformed into a grand hall big enough to house an enormous dinosaur skeleton. Photo: Peter Rae.

A $285 million plan by the Australian Museum to become the best museum in the southern hemisphere will put millions of previously unseen treasures on display.

It includes a 70-metre-long grand hall big enough for 2000 people to gather under a giant skeleton of an Australian dinosaur.

The plan will transform Australia’s first museum into one of the future, said CEO Kim McKay.

“Our collection of 18.5 million objects set us apart from nearly anywhere else,” said Ms McKay, who was appointed in 2014.

The museum’s collection was larger than Melbourne’s and its Pacific collection was the finest in the world, better than the Indigenous collection held by the Musee du quai Branly – Jacques Chirac in Paris, she said.

Yet its public floor space was the smallest of all major museums in Australia, allowing only 1 per cent of its collection to be displayed.

“It is one the world’s great museums, but it has been held back by the restrictions of its existing floor space and a history of buildings being added over time,” she said.

The proposal would turn a “higgledy-piggledy collection of buildings” in to a grand exhibition space that will let the museum compete on the world stage.

“This is about giving tourists and people who live in Sydney the opportunity to see this magnificent collection that has pretty much been hidden away for all of time,” said Ms McKay.

A master plan submitted to the state government on Friday proposes tripling the museum’s public floor space from its existing 6500 square metres by building a new wing, the equivalent of 13 storeys high. It will have views north and east over St Mary’s Cathedral and the Art Gallery of NSW to the harbour.

The new wing will be built on the corner of Yurong and William Streets, but will preserve the 1850s former national school house on that corner. It will replace a car park and a range of smaller buildings, including a demountable.

The grand hall covered with a glass atrium will be built in the middle of the museum’s city block, revealing the hand-hewn convict built sandstone walls of three of the museum’s existing 19th century buildings on three sides.

Until the 1980s, when the Still building – which will be demolished – was erected in the void between these walls, this space was used as carpark.

Ms McKay said the museum had often lost out to Melbourne on bids to host big international exhibitions because “the floor wasn’t long enough, the ceiling wasn’t high enough and the floor loading wasn’t strong enough.”

Rebecca Johnson, the director of the Australian Museum Research Centre, said the museum was “literally bursting at the seams”.

The new space will be large enough to display 20 times more of its collection than is on show now, and deliver a hoped-for lift in visitor numbers of nearly four times to around 1.5 million people a year by 2030.