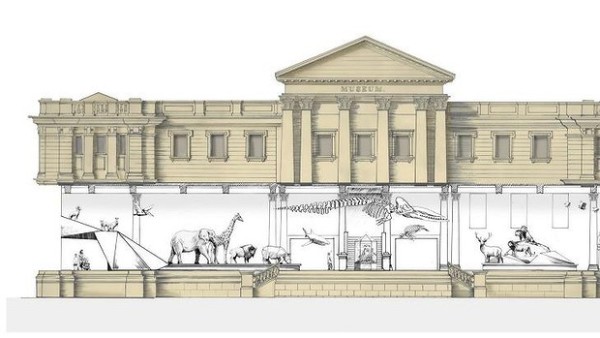 When Kim McKay​ was revealed as the new director of the Australian Museum last year, she received “a beautiful, handwritten letter” from an illustrious predecessor, Frank Talbot, who went on to head the Smithsonian Natural History Museum in Washington.

“He said, ‘Museums are strange places, Kim. Quite conservative. My advice to you would be to do nothing for the first 12 months. Just observe’.

Since she took over in April 2014 – causing raised eyebrows among those who knew her best as co-founder of Clean-Up Australia and National Geographic’s Genographic Project, event organiser, media pundit and eco-author – she has moved at breathtaking speed.

In July, the public will see the results of a $5.5 million transformation of the oldest museum in the southern hemisphere that has been entirely conceived and delivered in the first 18 months of a five-year contract.

The most obvious change will be the bold new entrance hall on William Street – a contemporary, carbon-neutral glass box known as Crystal Hall accessed via a suspended walkway. Designed by Neeson Murcutt Architects, it is intended not only to replace the notoriously poor entrance in College Street but also present an innovative, engaging new face of the museum to the outside world.

Moving the entrance, cafe and shop has allowed McKay and her team to reinvent the beautiful 1870-era Barnet Wing as a “new” permanent gallery, the first in 50 years. July will also witness the unveiling of Wild Planet, a visually dramatic natural history display that will feature 400 animals, living and extinct, telling the story of biodiversity around the world.

The new rooftop cafe has already been opened, allowing visitors a glorious skyline view of St Mary’s Cathedral, the Domain and the harbour.

None of this could have been achieved without the backing of the board of trustees led by president Catherine Livingstone and the Baird government which contributed an additional grant of $2.5 million to the renovation project. But the instigator who provided the vision, drive and networking skills to fast-track the transformation is clearly McKay.

“Someone joked to me the other day that this is the fastest government building project ever created,” she says. “It has been very fast, yes. But I’ve never been one to sit around. If you build the momentum and excitement, people say, ‘Great, can I help?'”

Because she was a trustee for two years before her appointment, she already had “insights” that allowed her to make a running start, she says. “And I really did want to signal to staff and to our other key stakeholders that we were going to dial it up. We’ve got people who have given their life and soul to the museum for 40 years. That needs to be recognised and celebrated, but we need a better offering on the floor [for visitors].

“Our science needs to be at the core of everything we do. I wanted to say, ‘Hey, we really can do this as a team’. And I needed to signal straightaway that things are changing.”

Read more
Positions Vacant » View All
» Kaituhi Maori / Maori writer – Te Papa
» Interpretive Planner – AWMM
Latest News » View All
Powerhouse’s 5 new exhibitions
Eucalyptusdom to Electric Keys Read more.
10 new art museums
Opening globally in 2022 Read more.
“Activating Smithsonian Open Access”
- new models for interacting with collns Read more.
Outback Museum of Australia, Charleville
$8.34M through in Building Better Regions Read more.
British museums face long Covid’s effects
visitation halves from pre-pandemic levels Read more.
Top +
Council of Australasian Museum Directors, c/o Ms Daryl Karp, Museum of Australian Democracy at Old Parliament House PO Box 3934 Manuka, Australian Capital Territory 2603 Australia, © CAMD 2021
Copyright: All information and resources provided on this website remain the copyright of the Council of Australasian Museum Directors. Permission is granted for viewing and downloading for personal and not for profit purposes. Those wishing to reproduce any materials for commercial, educational or other uses are requested to contact us.
Disclaimer: The content of this website is provided for information purposes only and is not intended as a substitute for professional advice. No claim is made as to the accuracy or authenticity of the content of the website. The Council of Australasian Museum Directors does not accept any liability to any person for the information or advice (or the use of such information or advice) which is provided on this website. The information on our website is provided on the basis that all persons accessing the site undertake responsibility for assessing the relevance and accuracy of its content. No responsibility is taken for any information or services which may appear on any linked web sites. Hostgator.
.