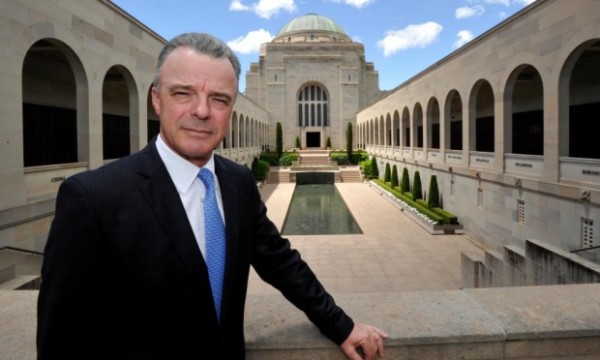 Brendan Nelson at the memorial in Canberra. Photograph: Alan Porritt/AAP.

Paul Daley, Australian War Memorial: the remarkable rise and rise of the nation’s secular shrine, The Guardian, 19 May 2015

Canberra was never meant to have an Australian war memorial.

In 1912 when Walter Griffin and his wife, Marion Mahony Griffin, won the international competition to design the capital of newly federated Australia, their plan included a casino where the monument to this country’s 102,000 war dead now stands instead.

This “casino” defied any evocation of poker machines, blackjack or roulette. Instead, set at the foot of Mount Ainslie (an elevation named after fake Scottish war hero, James Ainslie, that anchors the northern end of the land axis on the Griffins’ plan of beautiful geometry and orbit) the casino was to feature a leisure park, al fresco cafes, a theatre and beer gardens.

The city’s conservative Anglophile planners, chief among them veteran generals of the Boer War, loathed the European-style casino as much as they did the Griffins. They had already set about undermining the Griffin plan when the first world war intervened to do it for them. Australia’s optimism and social cohesion vanished. Suddenly a federation, uncharacteristically born without bloodshed, found itself divided over war and stoically nation building while mourning 62,000 killed and missing – and several hundred thousand more who could never be the same.

Australia changed irrevocably. The plan for Canberra was correspondingly redrawn to include the Australian War Memorial whose concept came to the country’s official first world war historian, Charles Bean, after a dying digger on the European western front asked if the people back home would remember him.

Bean could not have imagined Australia today. But given its immense popularity among Australian and international visitors, and the resurgence of commemoration during the centenary of the first world war there is no doubt the memorial stands as a prescient testimony to national sentiment and the bipartisan politics underpinning it.

Last year the war memorial was named Australia’s top landmark by TripAdvisor – ahead of the Sydney opera house, the Great Barrier Reef and Uluru. It also came in at 17 worldwide.

The memorial’s director, Brendan Nelson – who took up the post almost two and a half years ago after a career as a doctor, head of the Australian Medical Association, federal government minister, Liberal leader and diplomat – inquired about number 18.

“When I asked them what was number 18 they said the pyramids,” 56-year-old Nelson tells me, as we sit in his office overlooking the land axis that serves as the militarily precise Anzac Parade (the Griffins had planned it as a midway pleasance gardens leading to the casino).

“The centenary has heightened interest in all things that relate to our military history. I also think the way in which the stories are presented here [is] consistent with Bean’s vision of the place – it’s a semi-spiritual ambience in the Hall of Memory but in the galleries themselves … there is no sense of triumphalism, there’s no sense certainly of the glorification of war, there is respect that is shown to our former foes … the stories themselves of the individuals … are told in ways that are compelling and interesting.”

Nelson, about half way through his five-year contract, ranges broadly during our conversation about the direction of the memorial on his watch, its depiction of Indigenous Australians, its refusal to depict colonial frontier war, the impact of war on service personnel and their families, and the pantheon of the first world war in Australia’s cultural and historical narrative.