January 21st, 2021 | Browse other: News. | Tagged with: Australians are willing to be vaccinated for COVID-19, Australians support masks and border closures, COVID-19 | 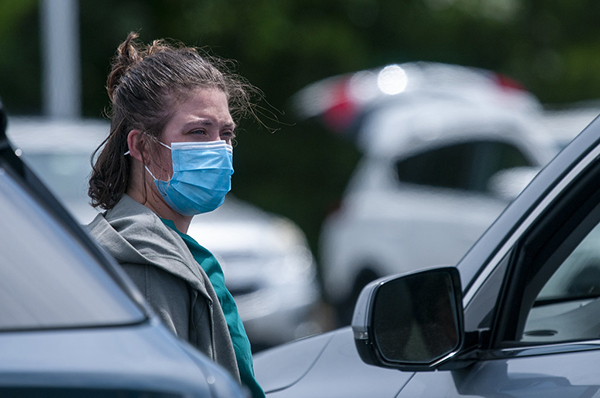 Australians support masks and border closures and are willing to be vaccinated for COVID-19, Roy Morgan, 17 January 2021

A special Roy Morgan survey into Australian attitudes towards COVID-19 shows nearly three-quarters of Australians (72%) say mask-wearing should be compulsory and over two-thirds, 68%, don’t want State borders to be completely open.

In addition over three-quarters of Australians (77%) say they would be willing to be vaccinated if a new Coronavirus vaccine became publicly available according to the survey conducted with an Australia-wide cross-section of 1,243 Australians aged 18+ on Thursday January 14 – Friday January 15, 2021.

Support for the compulsory wearing masks is highest amongst women (77%), people aged 65+ (78%) and in a geographic sense it is highest in New South Wales (80%) and Victoria (77%). In contrast only 53% of people in South Australia say mask-wearing should be compulsory.

Analysis by Federal voting intention shows Greens supporters (82%) are the most likely to support the compulsory wearing of masks ahead of ALP supporters (74%) and L-NP supporters (71%).

In Victoria mask-wearing was wanted by 65% in November, now 77% – so up – although lower than when Roy Morgan measured in Victoria in August (89%) and September (87%) during that State’s second COVID-19 wave.

A large majority of 85% of people in Western Australia don’t want State borders to be completely open today – a higher rate than any other State and in line with the tough border policies of the State-enforced by Premier Mark McGowan.

There is also strong consensus to not completely open State borders amongst people in Tasmania (79%), South Australia (75%), Queensland (73%) and Victoria (70%).

Vast majority of Australians say they’ll be vaccinated when a Coronavirus vaccine is available – unchanged on December 2020, but down on earlier in the pandemic

Over three-quarters of Australians (77%) say they will be vaccinated when a Coronavirus vaccine becomes available and this sentiment is high across a broad range of demographics including men (81%), women (73%), across all age groups and in all six States.

Interestingly, supporters of the three main political parties are in agreement on this question with 78% of L-NP supporters, 77% of ALP supporters and 81% of Greens supporters saying they would be willing to be vaccinated when a Coronavirus vaccine becomes available.

Support for being vaccinated is unchanged on November 2020 when 77% of respondents to a special Roy Morgan survey conducted in conjunction with Gallup International agreed they would be vaccinated when a vaccine became available including 41% who strongly agreed and 36% who agreed.

Earlier in the pandemic, back in March/April 2020 when the first lockdown was enforced around Australia, support for being vaccinated for COVID-19 was significantly higher with 87% of Australians in early April agreeing they would be vaccinated including 56% who strongly agreed and 31% who agreed.

Michele Levine CEO Roy Morgan, says Australians have delivered resounding responses to the questions of compulsory mask-wearing (in favour), opening all state borders (against) and being willing to be vaccinated when a new coronavirus vaccine becomes publicly available (in favour):

“A clear majority of 72% of Australians support compulsory mask wearing with support highest in the two States with the highest number of COVID-19 cases – NSW (80%) and Victoria (77%). Unsurprisingly support for compulsory wearing of masks is much lower in all other States with only 53% of South Australians, 63% of West Australians and 64% of Queenslanders in support of the measure.

“There is also not such a great partisan divide on the issue as has been seen in other countries such as the United States. Large majorities of L-NP supporters (71%), ALP supporters (74%) and Greens supporters (82%) are all in favour of the compulsory wearing of masks.

“When it comes to the opening of State borders the views of Australians tend to align with their respective State Governments. NSW has had the most open border policy throughout the COVID-19 pandemic and only closed its borders’ once – when daily local cases of COVID-19 ballooned through 100 in early July. In NSW a slim majority of 55% of respondents are against all State borders being completely open today – clearly the lowest against opening the borders of any State.

“At the other end of the spectrum people in the two States with the most restrictive border policies are most in favour of keeping State borders closed. A large majority of 85% of West Australians and 79% of Tasmanians don’t want State borders completely open today. These results indicate voters tend to align their views with the policies of their respective State Governments when these policies are demonstrated to be an effective response to the threat posed by COVID-19.

“The COVID-19 vaccine is set to be rolled out across Australia starting from next month and the good news is a clear majority of 77% of Australians say they will be vaccinated when the vaccine becomes publicly available – and this support is strong across all sections of the community including both genders, people of all ages, supporters of different political parties and in every State and Territory.”

Australians surveyed were each asked the following questions to determine their attitudes towards wearing masks, the opening/closure of State borders and whether they would take a COVID-19 vaccine:

Click here to view more detail on the three questions.