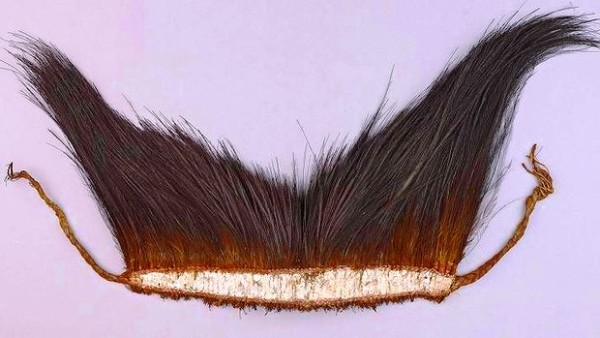 Part of Kebisu’s headdress, collected in the Torres Strait from Maino by Alfred Cort Haddon in 1888. Photo: The Trustees of the British Museum.

The day he pressed his father’s treasured ceremonial headdress into the hands of an Englishman, Torres Strait Islander Maino must have known life was changing for his people.

“Maino gave me the headdress his father King Kabagi [Kebisu] used to wear when on the warpath and a boar’s tusk ornament!” wrote English anthropologist Alfred Cort Haddon in his journal in 1888. “We were such good friends he … wanted them exhibited in a big museum in England where plenty of people could see his father’s things.”

Skip forward several generations and Maino’s great-grandson Ned David, a prominent Torres Strait traditional owner, could not be more proud. “Maino was an absolute strategist,” Mr David says. “He must have realised change was on the way, and [ensured] the interests of his own people were looked after.”

The headdress has returned to Australia for the first time, more than 120 years later. With its thick black cassowary feathers, it’s one of the hero objects in Encounters, an exhibition of key Aboriginal and Torres Strait Island artefacts at Canberra’s National Museum of Australia, from November 27-March 28, 2016.

More than 150 items held by the British Museum have returned for exhibit alongside work by contemporary indigenous Australians. Combined, the collection forms a circle of our cultural history.

Drawcards include two spears and a shield taken from the Gweagal people by Captain Cook and his crew at Botany Bay in 1770. This first contact is a defining moment in Australian history: the objects a tangible witnesses of our own, merged histories.