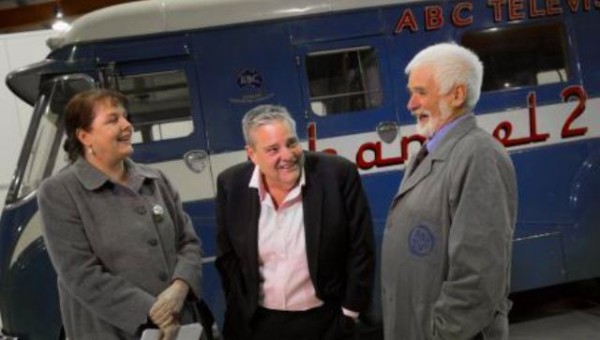 An armband worn by a Polish woman who survived a Second World War Nazi concentration camp, Indigenous stone tools from ages past and a rug made from rabbit pelts: these are some of the objects that have been examined by Mikey Robins, National Museum of Australia curators and special guests in the first batch of videos released as part of the Museum’s Defining Moments project.

Mikey and the Museum recently set about producing a second set of videos on the topic of collection objects relating to defining moments.

This second set focusses upon these objects and their stories:

Once again, Mikey has engaged with the Museum’s curators in the process of unlocking the stories of these objects, and how those stories contribute to the Defining Moments project narrative.

The initial filming for these four objects is complete, and the post-production phase is well under way. Keep an eye on the Defining Moments webpage or this blog for an update on the release of the finished videos. The Museum’s online collection search is a good source of information about the objects, if you would like to investigate them before the latest videos are available online.

Mitch is the Digital Outreach Co-ordinator at the NMA.