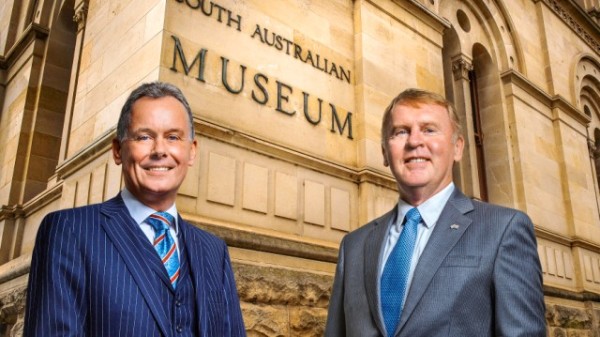 Born and raised in Adelaide, Dr Thomas was selected among thousands of applicants to join NASA in 1992. Over a 22 year long career as an astronaut he went on four space flights, spent 177 days in orbit, visited the Mir space station and undertook a lengthy spacewalk.

“I recall as a boy aged nine or ten, going to the South Australian Museum to see an exhibition about space,” said Dr Thomas.

“I thought wow! The exhibition is what first sparked my curiosity about space.

“Dr Thomas is a remarkably accomplished and prominent individual, and it is an honour for the Museum to have him as our Patron,” said Mr Oldman.

“The South Australian Museum has been proudly displaying the spacesuit that Dr Thomas wore on the launch and re-entry for his Mir Space Station expedition in one of our permanent galleries.

“Now we have the pleasure of working with the man behind the spacesuit, who also appreciates what happens behind the scenes at the Museum.

“The South Australian Museum is much more than its displays and exhibitions, although these form a vital part of how we communicate with the public.

“We are the leading museum within Australia in terms of securing research funding.

“On an annual basis our researchers attract more Australian Research Council grant money than all other Australian Museums combined.

“But we need to maintain South Australia’s scientific momentum.

“That is why it is vital for us to have Dr Thomas on board as our Patron, as he will help to encourage younger generations to pursue scientific, technological and mathematically based careers.

“Dr Thomas demonstrates through his brilliance, determination and achievements that even the sky is not the limit,” said Mr O