August 14th, 2019 | Browse other: News. | Tagged with: China to replace the US as Australia's leading research partner, Chinese collaboration has soared from zero to 15 percent of Australian scientific research | 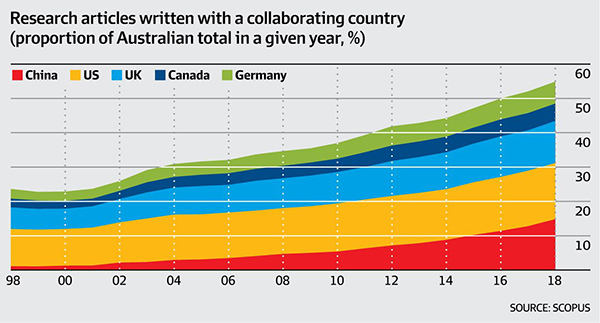 China will eclipse the United States as Australia’s most important collaborator on scientific research this year, putting new pressure on universities and the Defence Department over the conflict between Australia’s economic interests and its strategic objectives.

That comes as a global trade war looms driven by US and Canadian concerns about China’s leading technology company, Huawei.

The report measured the number of university research papers written in collaboration with scientists in China compared to the US, UK and Germany.

Since 1998 Chinese collaboration has soared from zero to 15 percent of Australian scientific research.

Author of the report, James Laurenceson, said Australia spends a tiny fraction of what the US and China spend on research and if it wanted to maintain its high-income status it had to be open to cross-border flows of knowledge and technology.

The only factors holding back the exponential growth rate in Australia / China research collaboration were fears in Canberra about national security, deteriorating conditions for academic inquiry in China and a worsening situation for research funding in Australia.

Professor Laurenceson said earlier this year the Defence Department had argued for the Defence Trade Controls Act (DTCA), which monitors technology exchanges, to be strengthened owing to “changes in the security environment”.

But he said any tightening of research collaboration risked jeopardising the Australian economy, which is dependent on countries such as China for capital, intellectual resources and a market.

His research used citations in academic journals as a measure of intellectual collaboration. Not only was China getting far more mentions than ever before, the quality of the research was getting better.

Mentions of joint Australia / China research in the top 1  per cent of most-cited articles – a proxy for high-quality research – climbed from just four in 1998 to nearly 400 in 2017, which means China is now just behind Germany for high-level research collaboration with Australia.

“The natural trend for Australian researchers is to work with the best. The reality is whether we like it or not more of the world’s best knowledge will come out of China.

“I’m not saying we don’t need to be cautious. But we don’t want to shoot ourselves in the foot. In the future the best research will be done out of China.”

He said the research collaboration and joint projects between US and Australia universities were still in a growth phase. The difference was that China was now growing faster.

The US was more important to Australia in life sciences such as medicine whereas China was more important in  engineering, materials and computing. He said the two areas should be seen as complimentary but admitted the Chinese interest in the physical sciences prompted concerns in Canberra relating to defence and geopolitics.

“A lot of weapons and military equipment rely on hard engineering skills. That’s what causes concern. I’m not discounting that.

“But one thing the hawks miss is that China is one of the most engaged powers technologically and it makes sense for us to engage with them.”

He said it would be easy for research in a range of technologies to spill into artificial intelligence, which the Chinses Communist Party was using to monitor citizens, commit human rights abuses and develop unmanned warfare.

“Even in cases where collaboration is not in our interests Australian researchers might be working to help Chinese colleagues do things like genetic testing, which is used to identify Uighers from other citizens.”

Recently it was reported as many as 1 million Uighers were in detention in China as Beijing clamps down on Muslim minorities in the country’s north west.

Mr Joske said there were technologies that can’t be exported to China under the DTCA legislation but researchers can collaborate on them, for example, navigation. He had spoken to a scientist earlier this year who admitted he was collaborating on a project that would be unavailable for export under the Act.

“I think we should align our research collaboration with countries that share our values and our security interests.”

The director of the Australian Centre on China in the World at the Australian National University, associate professor Jane Golley, said ending collaboration on research with China would not stop human rights abuses.

The country had a strong growth rate and enormous capacity for productivity improvements. Combined with the size of its market any country deciding not to work with China would end up on the wrong side of history.

Jiewen Gan from Shanghai Rankings will take part in a panel on Metrics of Research Success at the AFR Higher Education Summit, 2019, August 27 and 28.