March 7th, 2019 | Browse other: News. | Tagged with: animals in warfare recognised by AWM, The forgotten participants in Australia's wars | 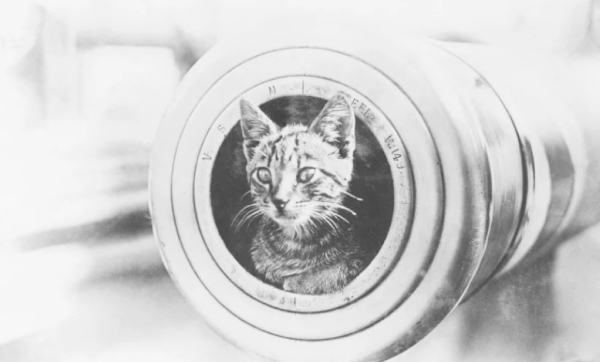 Red Lead, the ship’s cat, on board HMAS Perth. She died with the boat.

Tens of thousands of animals went to war with Australian soldiers over the past century; most never returned.

Cats went to war zones in big numbers, most taken for rodent control on ships, but many also being carried to the battlefield for company or for roles in the war, as photographs of soldiers show.

Dogs and pigeons were used as messengers, horses were used for transporting supplies, and even kangaroos and koalas were brought along by soldiers as mascots.

Most of these animals died in conflict, many were given to other countries, never to return to Australia. Some were smuggled back home by soldiers who had grown attached.

The actions of these animals in warfare will be marked by the Australian War Memorial on Sunday, the first national day for war animals in Australia.

War Memorial historian Dr Meleah Hampton said animals had been used in conflicts around the world “for millennia”, and Australia was no different.

During the Boer War and World War I, Australians relied heavily on animals like horses, mules, dogs and pigeons, for transport and communication, Dr Hampton said.

Some animals were taken as mascots, providing companionship and support to Australians far from home. These could be anything from “ducks to monkeys, rabbits, squirrels, and even kangaroos and koalas”, Dr Hampton said.

“This usually began when one individual soldier developed a relationship with an animal and brought it along,” she said. “Often it would then become a sort of mascot for the whole section.”

In 1943, the Dickin Medal was introduced to honour bravery by animals in conflicts and the medal continues to be awarded today. Since its introduction, 34 dogs, 32 pigeons, four horses and one cat have won the award.

In 2018, Australian dog Kuga received the Dickin Medal for its actions in Afghanistan with the Special Air service Regiment in 2011. Kuga, the first Australian dog to receive the medal, discovered an ambush. The dog was shot five times, and while it survived Kuga died less than a year after returning to Australia.

While regulations restricting the use of animals in war have been place since the Second World War, service dogs continue to play a large role in military conflict, including for detecting explosives, and saving Australian lives in the process.

As part of Sunday’s commemorations, the Australian War Memorial will offer tours, exploring the role of animals during wartime and supply purple poppies, the symbol for animals which served at war. The National Day for War Animals is on February 24.