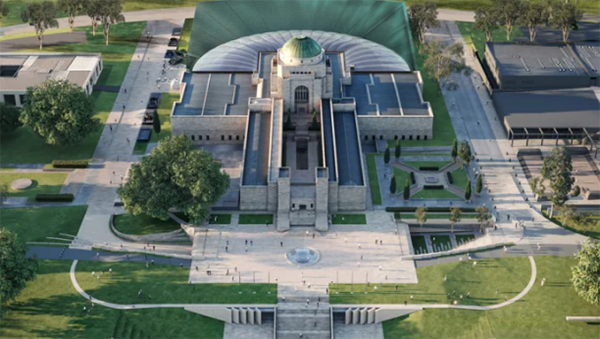 The incoming director of the Australian War Memorial has defended its controversial $500 million redevelopment and vowed to expand the institution’s mandate to focus on living veterans and more recent conflicts.

Matt Anderson, Australia’s deputy high commissioner in London, was unanimously selected by an appointment panel to replace retiring boss Brendan Nelson and steer the memorial through the biggest extension since it opened in 1941.

While promising to “listen very carefully” to critics of the demolition of the award-winning Anzac Hall to the rear of the shrine, Mr Anderson told The Sydney Morning Herald  the memorial had to do a better job of remembering more recent conflicts.

“People are invested in one of Australia’s great institutions. I can understand some people don’t want to see change. They’re entitled to their views,” Mr Anderson said.

“There are 102,000 reasons on the honour roll at the memorial for those people to be able to state their concerns and frustrations; that’s the beauty of democracy.

“But some 100,000 veterans have been created over the last couple of decades and I think it is arguably time for their stories to be told and told in more detail.”

Asked whether the memorial risked misinterpreting recent conflicts by not allowing enough time for study and reflection during the period between their conclusion and recognition at the Canberra institution, Mr Anderson said the memorial “can do both”.

“Any understanding of history evolves over time certainly, but I think for those veterans who walk amongst us the war memorial should be a place where they can also come and understand and see themselves and their service conveyed contemporaneously.”

The $500 million upgrade will take nine years and include a new southern entrance, reconfigured galleries and 4000 square metres of new exhibition space.

Retired Major General Steve Gower, Dr Nelson’s predecessor as director, has described the plan as a “prize example of philistine vandalism masquerading as progress” and an “egregious waste of money”. The price tag has also ruffled feathers inside Canberra’s other museums and art galleries, which have been asking for more funding from the Coalition government with limited success.

Mr Anderson said he would consider the feedback of those who used a public consultation period to ask for changes to the plans, but said the negative comments would be viewed through the “whole sweep” of other views.

He also said he had not reached a view on whether the war memorial would continue to accept sponsorships from arms manufacturers under his leadership, but said full taxpayer funding was not realistic. 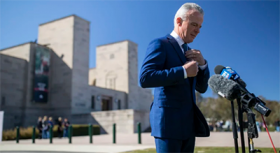 “It’s not something I’ve had the chance to speak to people about. I’ve followed the media about it but it’s something that I will speak to the board about and seek their advice and direction on,” he said.

“But anyone who goes to the great museums of the world knows they cannot exist only through taxpayer-funded revenue streams. They are always seeking alternative revenue sources and I think for me, it’s a question of what’s the right mix and making sure that any sponsorship is appropriate to the story being told.”

A former ambassador to Afghanistan and the Solomon Islands, Mr Anderson won praise for leading Australia’s response to the 2009 Pacific tsunami. He also headed up the Department of Foreign Affairs and Trade’s response to the downing of Malaysian Airlines flight MH17 over Ukraine, which killed 298 people, including 38 Australians.

Having spent eight years as an army officer, Mr Anderson said he had developed a lifelong interest in the war memorial and planned to volunteer there when he returned to Australia after his United Kingdom posting ended in 2020 but got the top job instead. Dr Nelson, a former Liberal Party leader and defence minister, encouraged Mr Anderson to apply for the job.

“Beyond his sharp intellect, strong work ethic and humility, above all else he brings to our nation’s most iconic and loved institution empathy for young veterans and the ability to tell their stories. He is the right person for this role,” Dr Nelson said.

Former prime minister Tony Abbott was recently appointed to the war memorial board, which is chaired by media mogul Kerry Stokes.