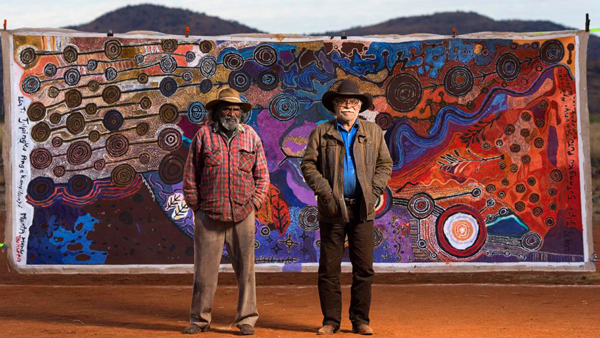 Keith Stevens and Frank Young with a painting by the senior men’s collaborative prepared for the Australian War Memorial. Picture: Rhett Hammerton.

Across Afghanistan and Iraq, the battlefields of Turkey and France, Red Centre plains and outback painting sheds, fighters for Australia are united by their love of country.

Soon, in the Australian War Memorial, where director Brendan Nelson says “we reveal our character as a people”, a monumental new painting illustrating what defending country means to Australia’s First Peoples will hang opposite the bullet-riddled Gallipoli landing boat.

“We need a work of art that reflects the importance of the earth, of our land, our common land, Aboriginal land, Australian land,” Dr Nelson says.

“More than 102,700 Australians are listed here on the roll of honour, including First Australians. In the end, it’s about the defence of our land — Australia.”

The 5m-long painting, to be ­officially unveiled this year, was commissioned through South Australia’s APY Art Centre Collective, in part in recognition of the roughly 1100 indigenous Australians known to have fought in WWI.

While national attention was focused on the referendum council meeting at Uluru in May, a group of artists from the Anangu, Pitjantjatjara and Yankunytjat­jara Lands visited the AWM and gathered around the Tomb of the Unknown Soldier.

They held hands and Mumu Mike Williams, a senior artist and a minister, said a prayer. “Everybody was really sad, but I was thinking that they (the soldiers) didn’t die for nothing. They were fighting for the land — land is very important,” Williams says.

“In the same way, the old ­people are painting so that everybody knows that we are still fighting for the land, the land and the Tjukurrpa (Dreaming stories).”

Indigenous enlistment officially was precluded until 1955. During WWI, discrimination was rife and many Aboriginal groups were still reeling from the horrors of early settlement. The AWM has acquired works by Rover Thomas and Queenie McKenzie depicting massacres.

“It’s so that people come here and get a sense of, ‘This is what these people went through, and then they are trying to fight for us?’ ” Dr Nelson says.

Skye O’Meara, who runs the APY Art Centre Collective, says the work was emotional. “There’s iconography of spears and punu (trees) shown protecting the areas of country that the senior men have painted,” O’Meara says.

“At the outset, I didn’t foresee that the AWM, that this project, would be such a leveller for Anangu and whitefellas.”

APY chairman Frank Young says parts of the canvases record tribal battles dating back to long before the First Fleet. He participated in one of the last such skirmishes, in the 1950s, with Williams and Hector Tjupuru Burton, a venerated elder and artist who died recently.

“It was just like a big storm. We got down, and we saw these spears, like a really big cloud, moving together,” Young says. “We want to show whitefellas the way we fought for the country and are still fighting for the country (in a different way).”

Punu are a potent symbol that emerged in Anangu art in response to outside influences seen as damaging culture. The canvases also commemorate Burton, who painted Punu first.

The artists were moved by the story of William Punch, an indigenous WWI veteran from Lake Cowal, about 350km west of Sydney, and the sole survivor of an 1880s massacre. Punch was apparently found “among the dead bodies … trying to suckle from his dead mother’s breast”.

He was adopted and became a popular larrikin who fought in Egypt and France. “He was looked upon as a mascot,” a wartime report states.

Witjiti George, another artist, says Punch’s story made the old men cry. “If he was the last one from his mob that survived, that’s special. It means he’s a Ngangkari (powerful spirit),” George says.

The AWM is expected to choose one of the canvases but could take both.

Keith Stevens, a traditional owner of Nyapari, says the works also show Aboriginal people ­defending land by passing on culture. “I’m living here because of the country that we look after, the Tjukurrpa that our ancestors left, that our fathers left for us,” Stevens says.

“We are telling the world that we’ve got our country, we look after our country, and that is why we are strong.”