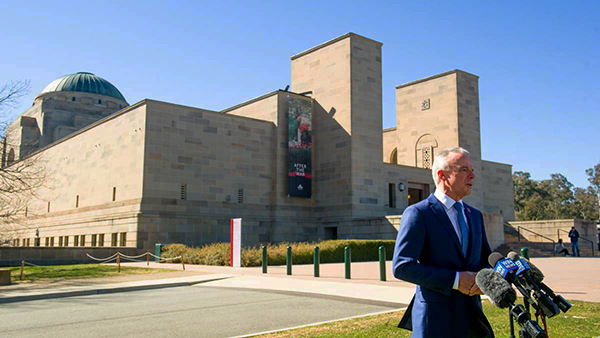 The War Memorial has stopped reporting private donations made by individuals and corporates in its annual reports, in a move it says brings the institution into line with other public agencies.

According to the memorial’s annual report tabled in parliament this week, the institution received more than $4.5 million in donations and sponsorships in 2018-19, down from the $6.7 million in the previous financial year and more than $14 million in 2016-17.

In previous years Memorial director Brendan Nelson would thank major donors and partners by name in an opening statement, and donors were listed elsewhere as part of an output for generating revenue.

The memorial has faced criticism in the past for accepting donations from weapons manufacturers, with activists arguing accepting funds from companies that profit from war is inappropriate.

Dr Nelson has refuted this, saying it’s the companies’ duty to donate to the memorial.

A spokesman for the memorial said the change in reporting wasn’t because generating revenue from donations was no longer a priority, but that the annual report had been reformatted using a new “digital annual report tool” developed by the Department of Finance.

“As a registered charity, and like all cultural institutions, the Memorial continues to focus on the generation of non-government revenue.”
AWM spokesman

“The DART system provides a process that ensures the Memorial reports all disclosable activity, figures and data in a standardised manner, aligning its report with the requirements of the whole of government 2018-19 reporting cycle. In this way, the Memorial’s data is comparable with the Annual Reports for all Commonwealth entities and Commonwealth companies,” the spokesman said.

“As a registered charity, and like all cultural institutions, the Memorial continues to focus on the generation of non-government revenue.”

Donors and partners are now listed on the memorial’s website, although the amounts donated are no longer listed.

The memorial’s spokesman said this was due to requests from donors and partners.

Weapons companies Lockheed Martin, Thales, BAE Systems, Boeing and Leidos are among the memorials donors for 2018-19.