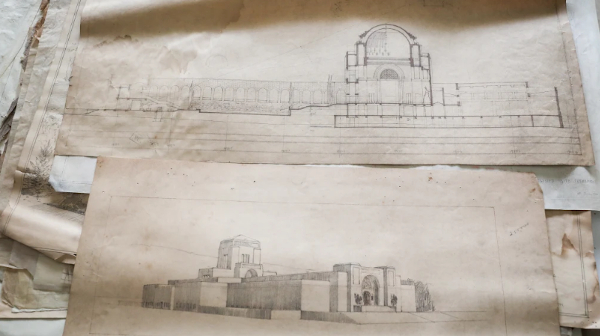 In the midst of World War II, Sydney architect John Crust climbed Mount Ainslie to paint a watercolour of the newly-built Australian War Memorial in Canberra.

It was not long before the official handover of the building he had dedicated years of his life to and which would become one of the most iconic in the country.

“That was him saying goodbye to the Memorial,” his granddaughter Lucy King says.

“He loved it, and he drew it several times; he put his blood, sweat and heart into it. I don’t think he left any stone unturned, he gave it everything.” 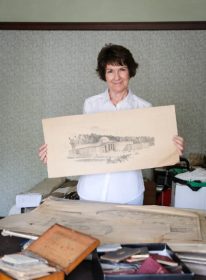 Her grandfather was one of the architects behind the Memorial. Crust’s younger brother William had been killed in France during World War I and he knew all too well what the Memorial would mean to those whose loved ones never made it home.

King found the watercolour more than 70 years after it had been created, hidden among her grandfather’s personal papers at the family home that he designed and built in the Sydney suburb of Mosman during World War I.

The painting is part of a remarkable collection of Crust’s work that includes architectural plans and drawings of the Memorial as well as sketchbooks, paintings, letters and diaries.

“It was like a treasure trove,” King says. “He just drew and drew and drew. He was always playing with the design – different entrances, different facades … and was busy experimenting using reams of paper trying to resolve the issues … until he was happy with the balance.”

There are plans and blueprints for the Memorial’s dome and facade as well as designs for the doors to the Hall of Memory and the chain on the parapet above the main entrance.

The Memorial’s senior curator of official and private records, Margaret Farmer, says the Crust collection is a find of national importance. 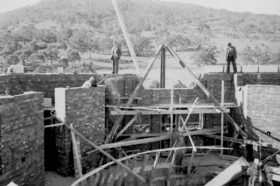 “John Crust made a singular contribution to the Memorial and therefore to the nation,” Farmer says. “It’s quite remarkable that the material has survived all this time.

A quiet and unassuming man, Crust was born in the Yorkshire city of Leeds in 1884 and showed a talent for drawing from a young age. He left school at 13 to work for the architect and surveyor Thomas Edward Marshall in nearby Harrogate.

In 1904, Crust was diagnosed with tuberculosis. Advised to give up architecture and live an outdoor life, he spent the next six months on a Yorkshire farm before migrating to Australia.

“That was his one-way ticket to health, and a life,” King says.

Crust celebrated his 20th birthday on board the ship and spent his first six months in Australia working on a farm near Temora in country NSW. In his diary, he meticulously records how he spent his days planting cabbages, harrowing fields, threshing grain, working the cart and dray, and cooking and peeling potatoes. 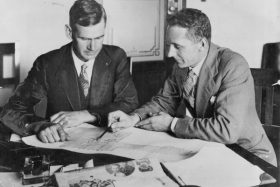 Difficult times: the designers of the Australian War Memorial John Crust and Emil Sodersten in 1928.

“I was not very happy there,” he later wrote in a letter. “But it built me up again, which was what was required [and] by that time my health was quite restored.”

He was offered a job as a draughtsman in Tasmania in 1905, and went on to work in Sydney and later Melbourne, where he collaborated with John Smith Murdoch, who became chief architect of the Commonwealth of Australia and designed Old Parliament House in Canberra. Murdoch praised Crust’s work as being of an “exceptionally high quality” and wrote that the young man was “entrusted with the best class of work”. 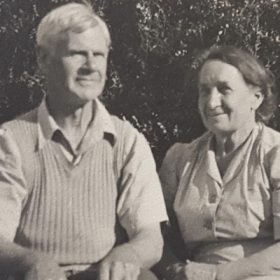 When World War I broke out Crust tried to enlist but was rejected on medical grounds. His younger brother, Lance Corporal William Crust, served with the 1st/5th Battalion, West Yorkshire Regiment (Prince of Wales’ Own) and was killed near Thiepval in France on September 3, 1916.

“It must have been awful,” King says. “He couldn’t go, and now he had lost his brother, so I think that when the idea for the Memorial came up, it meant a lot to him. It was a tribute to his brother, and to all the fallen, and to his country.”

Crust’s brother had died during the darkest days of the war, just as the idea of a Memorial was conceived by Australia’s official war correspondent, Charles Bean.

Bean had seen first-hand the devastation of the war at Gallipoli and on the Western Front and was determined that the men and their deeds should not be forgotten. He envisioned the Memorial as a shrine to their memory, a museum to house their relics, and an archive to preserve their thoughts and records of their deeds. 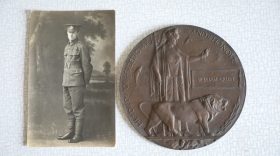 Crust entered the international competition to design the Memorial in the 1920s, and his entry was the only one of 69 to come in under budget. He was asked to submit a joint design with another entrant, flamboyant Sydney architect Emil Sodersten.

The two men were very different and their relationship was difficult; Sodersten resigned from the project three years before the Memorial opened on Armistice Day in 1941.

“Crust’s diaries document it all from his perspective, as he experienced it,” Farmer says.

“His personal papers record the events and work that shaped him and made him the architect who could suggest the elegant solution of placing the Roll of Honour within cloisters, solving the problem of meeting the Memorial competition specifications within budget. 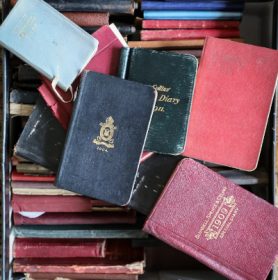 A collection of John Crust’s diaries and notebooks detailing his time working on the Canberra memorial. Credit: Australian War Memorial.

“It is this commemorative area that is the most beloved part of the Memorial, and where so many Australians have participated in the Last Post ceremony.″⁣

On that Armistice Day, Crust travelled to Canberra for the public opening with his wife, Irene, intending to stand quietly among the crowd gathered for the occasion. When the Memorial’s director, John Treloar, realised the oversight, he insisted Crust and his wife be seated on the dais with the other dignitaries. The man whose designs for the Memorial had become a reality sat quietly at the back, out of the limelight.

Almost 80 years later, King feels a special connection to her grandfather whenever she visits. She was only eight years old when he died in 1964, but has fond memories of him and the building he devoted so much to. 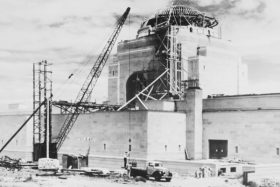 A photograph from Crust of the war memorial under construction. Credit: Australian War Memorial.

“I love it and I’m extremely proud,” she says.

“The Australian War Memorial was his gift to the country that had been very good to him. It was enough for him that the building was as good as it could be. Personal aggrandisement was not in his nature. He was just prepared to put one foot in front of the other and get the job done to the best of his ability.

“He loved it and he followed it until the day he died.”