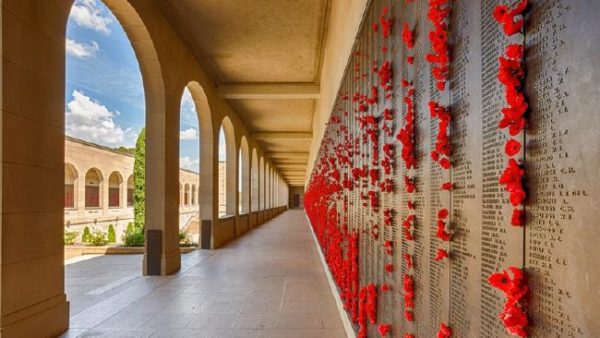 The Australian War Memorial in Canberra. Source: The Courier Mail.

Terry Sweetman, Australian War Memorial one of best museums in the world, The Courier Mail, 11 November 2016

A heavy hand fell on my shoulder and I turned around to find a guide with his finger to his lips.

“Quiet,’’ he ordered, complaining that my shoes were making a squeaking noise as I shuffled along the linoleum of the Australian War Memorial in Canberra.

I must have been about 10 which would make it 1956, just 15 years after the memorial was opened.

Now, reverent silence is replaced by childish prattle, foreign voices and sometimes laughter as a new generation makes its way through a memorial that is so different to what I recall as a child.

The memorial was a latecomer in our national commemoration of those who served and died in war.

As the country falls silent tomorrow to observe Remembrance Day, the Australian War Memorial (AWM) will mark 75 years since it opened its doors so that those who served the nation will never be forgotten.

The War Memorial was unveiled on November 11, 1941, and since then countless Australians have made the emotional pilgrimage to the Canberra site — including those who lost loved ones in some of history’s fiercest battles.

The idea to build a permanent, national memorial was conceived by Australian war correspondent Charles E.W Bean after he witnessed the carnage on the Somme battlefield in World War I.

He wanted to preserve the memory of the more than 60,000 Australian soldiers who had given their lives for the country, and explain the experience to those who had not witnessed it.

With the flick of a switch, the great bronze doors swung silently open and 75 years ago on Friday, the Australian War Memorial in Canberra was a reality.

It was the culmination of nearly two decades of deep thought and planning, followed by five years of construction, creating an icon of Australia perhaps only surpassed by the Sydney Opera House for national and international recognition.

The idea of a national memorial commemorating those who served and died in the Great War came from official correspondent Charles Bean following the brutal 1916 battles of Fromelles and Pozieres.

In less than two months, the Australian Imperial Force lost more dead and wounded than in seven months on Gallipoli. Worse was to come in searing battles at Bullecourt and Passchendaele the following year.

Bean resolved the participants and their ordeal should be remembered through a national institution.

“On some hilltop – still, beautiful, gleaming white and silent, a building of three parts, a centre and two wings,” he wrote in 1918.