October 24th, 2019 | Browse other: News. | Tagged with: critics doubt the former PM will bring any insight to AWM, Tony Abbott is the wrong choice for the Australian War Memorial | 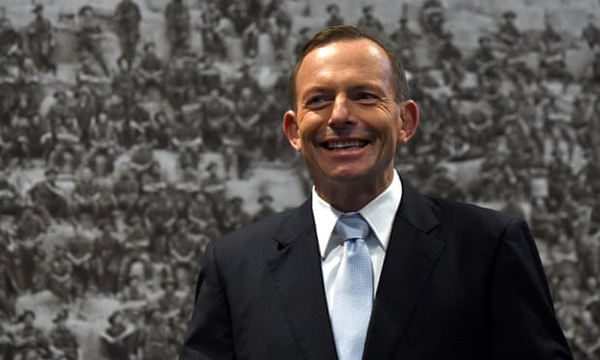 Tony Abbott is joining the Australian War Memorial council and there is speculation he may be a candidate to replace director Brendan Nelson. Photograph: Mick Tsikas/AAP.

The war memorial’s council lacks a professional historian and critics say it’s like a hospital being run by homeopaths not doctors.

The appointment of the former prime minister Tony Abbott to the Australian War Memorial council has further distanced the popular institution from the public it supposedly serves and, critics insist, still leaves the board without the critical advice of a professional historian.

Abbott, a military enthusiast who, sources say, as prime minister discussed the possibility of having as an aide de camp one of the country’s most prominent former soldiers, was appointed to the memorial’s governing council last week.

While the veterans’ affairs minister, Darren Chester, lauded Abbott as bringing “dedication, passion and knowledge” to the council, critics – including one of the institution’s former historians – doubt the former PM will bring any insight to the job.

Abbott was appointed after the recent death of long-serving memorial council member Les Carlyon, a former newspaper editor and the author of best-selling books including Gallipoli and The Great War.

Peter Stanley, the winner of the 2011 Prime Minister’s Prize for Australian History, says it has been too long since a professional historian was on the war memorial council and that Abbott is no substitute.

“At times the memorial’s council has included historians of note – for example, Roger Joyce in the early 1980s and Geoffrey Blainey in the late 1990s and early 2000s. But it has had no comparable professional advice for many years,” says Stanley, a historian at the memorial for almost three decades until 2007.

“The Memorial [council] lacking historians is like a hospital having no doctors on its board, or if it does, they are chiropractors or homeopaths – it lacks fundamental professional expertise at the highest level of policy making in the very field in which the institution operates.”

Stanley is among many notable Australians, including historians, former memorial chief executives and writers, who have opposed the controversial plans – hatched by the current memorial director, Brendan Nelson – to spend $500m on expanding the institution so that it can showcase more military hardware and mount exhibitions on current conflicts.

The memorial is a museum, archive and place of national remembrance whose charter stipulates it must help Australia “remember, interpret and understand” the country’s war experiences. Critics, including Heritage Guardians – a group opposed to the expansion – insist it is impossible for the memorial to adequately parse the myriad national impacts of conflicts to which Australia is still – or has recently been – committed to, a task that takes reflection and historical methodology over time.

Nelson has also been consistently criticised for refusing to tell the story of the frontier wars between Indigenous people and soldiers, militias, pastoralists and native police, and for using exhibitions about “black diggers” who served empire as a fig leaf for this gap in the institution’s commemorative function.

Abbott, they maintain, will probably stick with the policy status quo on the frontier wars – an issue the council has considered in recent years but determined not to change.

The novelist and historian Peter Cochrane, author of Best We Forget – the War for White Australia 1914-1918, says: “Let us hope that Mr Abbott’s appointment will shift the focus of the war memorial just a little. Let us hope that he might endorse Geoffrey Blainey’s call for the memorial to address the frontier wars of the nineteenth century, the one hundred years and more of conflict across this land, here at home. Let us hope for a commitment to an informed public memory on this subject. Let us hope for this, even when all hope of something other than the continued sanctification of the Anzacs seems to be futile.”

Abbott as prime minister was behind the $100m Monash interpretive centre on the European western front, a centrepiece of the $600m Australian commemoration of the centenary of the first world war. Critics – among them many prominent historians – lambasted the centre from inception. With visitor numbers well down on projections used to justify its creation, questions are now arising about whether it will be a museological white elephant.

There is speculation Abbott may also be a candidate for the memorial directorship after the departure of Nelson.

David Stephens, the editor of the Honest History website and a member of Heritage Guardians, wrote that Abbott was the wrong choice for the AWM council not just because his appointment would be seen as “jobs for the boys”.

“More important are the attitudes Abbott would bring to the council. He is also a leading member of the Anzackery ‘club’, spruiking an overblown, sentimental version of the Anzac legend.”

The memorial comprises eight current or former members of the Australian Defence Force, including the heads of the three services ex officio, an army reserve major general who is also RSL national president, two retired colonels, a retired wing commander, and a retired corporal and Victoria Cross winner, a business tycoon with a military history obsession (chairman Kerry Stokes), two businesswomen and a serviceman’s widow.

“As a military history buff, Abbott would fit in well,” Stephens wrote.

But he cautions: “The memorial in 2019 needs both a different style of person on its council – perhaps people who apply for positions in a public advertising round – and different attitudes – not boasting about how well Australians fight or repetitive commemoration of what Abbott once called ‘the glorious dead’ but evidence-based history of what war has done to Australia and Australians.”