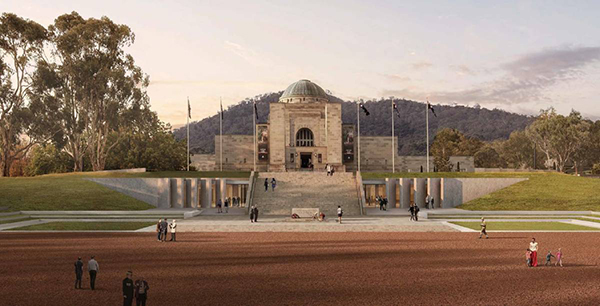 The standing committee on public works heard from a procession of witnesses who questioned the proposed redevelopment and its hefty price tag, including former memorial directors, war historians and a war widow.

Witnesses complained of a lack of consultation with stakeholders, former staff, experts and the general public and the overwhelming concern was the impact of the redevelopment on the social and physical heritage of the site.

However, Australian War Memorial Council chair Kerry Stokes said the public supported the expansion and was critical of those opposing the plans.

“Only after the final designs came out did the special interest groups seem to gather their momentum,” said Mr Stokes.

“And most of those are in Canberra. We will not satisfy every single person.

“The number of people who claim not to have been involved is very small.”

Former memorial directors Brendon Kelson and Major General Steve Gower and noted war historian Peter Stanley all said they had received no invitations to provide input on the project.

Member for Bean David Smith said he was disappointed to see the concerns of eminent individuals and Canberrans dismissed.

“We’re talking about people who have made incredible contributions to the story of the [memorial]. Dismissing them as special interests reflects very poorly on the [memorial].”

Mr Stokes also addressed the criticism of the project’s $500 million price tag saying there was no longer an option to redirect the funds towards any other projects or institutions as the money had already been earmarked by Treasury for the redevelopment.

“If they’re [the funds] not spent for this project, they’re not spent,” he said.

Architect and town planner Roger Pegrum detailed his concerns that the expansion would irreversibly damage the heritage of the site and alter the character of the memorial building.

He said the memorial was intended as a “simple statement of sacrifice and valour’ and housed a small amount of objects to better understand the actions of those who had served.

However, to extend the building so dramatically would “conceal the primacy of the fact that it is a memorial”.

“If built as drawn, it is an irreversible and complete change to the memorial,” he said.

Kellie Merritt, who’s husband Paul was killed while serving in Iraq, described at the memorial as a special place for her family, somewhere she could visit and see her great-grandfather’s, grandfather’s and husband’s name on the Wall of Honour.

She said it would be a shame if the memorial was forced to have “the burden of a brutish building on its shoulders”. She was also concerned the plan risked glorifying war.

Major General Gower questioned why alternative plans such as a previously discussed exhibition space in Mitchell for large objects in the collection or a separate gallery at the Campbell site which would leave the current Anzac Hall intact. He said this option has had plans drawn up since his time as director.

Former president of the Australian Institute of Architects Clare Cousins said due process had not been followed when asking for designs and could set a dangerous precedent.

She said prospective architects were told any designs must include the demolition of Anzac Hall and did not give architects an opportunity to offer different solutions for the memorial’s perceived space issue.

Current memorial director Matt Anderson said the building was never designed to be static and justified the expansion by saying Australia owed it to modern veterans to honour their service.

“We owe them no less than the debt we owe to previous generations,” Mr Anderson said.

“The most significant thing we can do is allow them to see their service recognised. To allow veterans to find a touch point, if not an actual object they served with, but something they can relate with.”

Several witnesses noted they did not oppose the inclusion of modern conflicts and resented the assertion, but argued these conflicts could be commemorated without such an extravagant expansion and cost.