You are here: Home » Articles filed under: 'News' » Article: 'AWM Council commits to ‘much broader,'

AWM Council commits to ‘much broader, 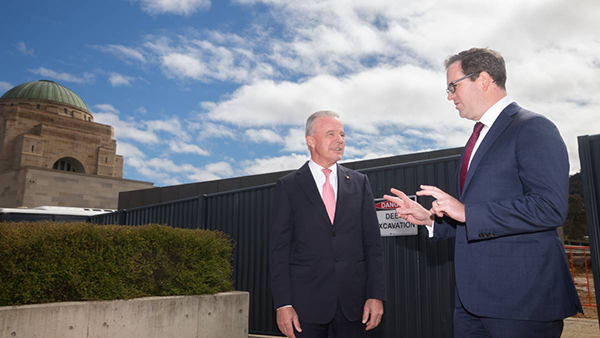 The War Memorial will expand its recognition of the frontier wars as part of its redevelopment, after years of calls for the institution to do more to tell the story of Australia’s violent colonial past.

Veterans’ Affairs Minister Matt Keogh on Thursday flagged the memorial would increase its displays on frontier conflicts as part of its expansion, saying it was a responsibility for all cultural institutions to reflect on them.

The minister made the comments as he announced a $10 million geothermal heat exchange would form part of the expansion in a bid to reduce carbon emissions, and as outgoing council chair Brendan Nelson defended the memorial’s handling of cost blowouts in the project.

Historians have long called for more recognition of frontier conflicts in Australia’s national war memorial, saying it should include displays and galleries telling the history of the violence that ensued as European colonists took the lands of First Nations people.

Advocates for greater recognition of the frontier wars have also recently argued it would be a practical expression of the spirit of the Uluru Statement.

Mr Keogh said the memorial would grow its reflection on frontier conflicts through its expansion.

“It’s important to recognise that the memorial already has some recognition of frontier conflict, and I’m aware that as part of the expansion program that the council is looking at how it can have some greater reflection upon that,” he said.

“The recognition and reflection on frontier conflict is something that is a responsibility for all of our cultural institutions, not just here in Canberra, but across the country, it’s important that we do raise awareness for people across the country about the importance of frontier conflict and the impact that that had on our First Nations people and to properly reflect upon and understand our history.

“There is already some elements of that here in the War Memorial and that will be expanded upon as part of the overall expansion project.”

Dr Nelson said the memorial council had decided to grow the institution’s displays on frontier conflicts.

“The council has made the decision that we will have a much broader, much deeper depiction and presentation of the violence committed against Aboriginal people, initially by British, then by pastoralists, then by police, and by Aboriginal militia, that will be a part of the new galleries,” he said.

“We will have more to say about that in due course when the gallery development is more advanced.”

Preparing for a net zero world

The War Memorial is adding a closed loop, underground geothermal technology heating and cooling system to the expansion, to be funded within the $550 million budget, in preparation for an economy that uses fewer fossil fuels.

It expects the heat exchange, planned to be one of the largest in the world of its type, to reduce the memorial’s energy usage and carbon emissions.

Memorial director Matt Anderson said it would save $1.3 million a year in heating and cooling costs, and cut carbon emissions, by generating electricity using thermal energy stored in the ground. The saving would let the memorial recoup the cost of building the system in about seven years.

The geothermal heat exchange will include up to 320 vertical bore holes, drilled 150 metres deep, across the memorial grounds’ eastern precinct.

‘No intention to request more funding’

Dr Nelson, who will depart the memorial’s council at the end of the year, defended cost blowouts in the institution’s expansion.

He said the War Memorial had no intention that it could “foresee at this stage” to ask the government for additional funding, after the expansion’s budget grew 10 per cent to $550 million this year.

“Anybody who is doing any kind of building work at the moment, whether you’re building a granny flat, to renovation to your home, through to a project of national interest … knows that building costs have been increasing far in excess of anything in our recent memory,” he said.

“And when the budget was done for the project, our auditors, our quantity surveyors, when all of the costings are put together for contingency and escalation funding, that of course preceded the events that have unfolded in the last two and a half years.”

The increases in the expansion’s costs were well below those faced by other construction projects, Dr Nelson said.

He compared the War Memorial project’s budget to the $1.7 billion cost of the National Gallery of Victoria redevelopment, the $830 million Allianz Stadium project in Sydney, and the multimillion dollar price tag for an upgraded Penrith stadium – which he described as “all very worthy projects”.

“This is our national memorial, a place of immense emotional intensity and meeting to Australian veterans and their families. It’s where we reveal our character as Australians,” Dr Nelson said.

“We owe it to everybody, Australians in particular, to get this right and we’re determined to do so including on the financial management of the project.”

Mr Anderson said the project, due to be completed by 2028, remained on track partly due to a decision to accelerate the redevelopment during the pandemic, and to bring forward some works. The memorial has concluded all major excavations and early works for the expansion.