The Prime Minister has unveiled the architects’ vision of how the controversial $500 million expansion of the Australian War Memorial will look. 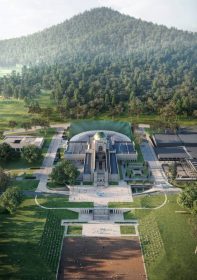 The Prime Minister has unveiled the architects’ vision of how the controversial $500 million expansion of the Australian War Memorial will look.

Scott Morrison spoke in glowing terms of the need for the spending as he opened a special exhibition on the site.

On show were a series of architects’ simulations of different parts of the development.

There is an aerial view as though from a helicopter flying over the expanded Memorial.

At the same time, the War Memorial explained how its application will now proceed.

There is an initial submission to the environment department to see if a further more detailed application is needed.

The national War Memorial was completed in 1941 and is now one of the most famous – and most visited – sites in Australia.

An AWM statement said a Heritage Impact Assessment would “determine if our plans will need formal assessment and approval”.

The expansion involves a huge new hall at the back of the existing iconic building (which will also see some internal changes). The plan also includes a new entrance and a modernistic glass tunnel linking to other parts of the site. Cox Architecture won the $4,288,900 contract to design the rebuilt, bigger Anzac Hall.

The War Memorial believes the plans will not destroy its classic look.

“Sensitively connected to the existing landscape, the detailed plans will ensure the heritage facade remains unchanged,” a statement said.

But if the Department of Environment and Energy disagrees, there will be more consultation in a few months.

There has been opposition to the expansion, particularly on the grounds of cost. Some critics have said the $500 million could be better used to help veterans or other cultural institutions. There has also been concern that trees will need to be cut down for the construction.

But at the unveiling of the images of the expansion, Prime Minister Scott Morrison gave a robust defence of the need for it.

Mr Morrison said the new wing was to honour fully the contribution by veterans of recent conflicts and peace-keeping missions in Somalia, Afghanistan, Iraq and East Timor.

Standing at a podium in the sun outside the cafe at the Memorial, Mr Morrison said that the after World War II, the collection of objects almost doubled, and more space was needed with the more recent conflicts.

“This project is about ensuring the stories of an entire new generation of service are told and remembered alongside those that inspired their own sacrifice and to do the same for future generations,” Mr Morrison said.

“This is the most significant reinvestment in our War Memorial since it was established after World War One and ultimately completed following the Second World War. I am pleased our Government is making this overdue investment.”