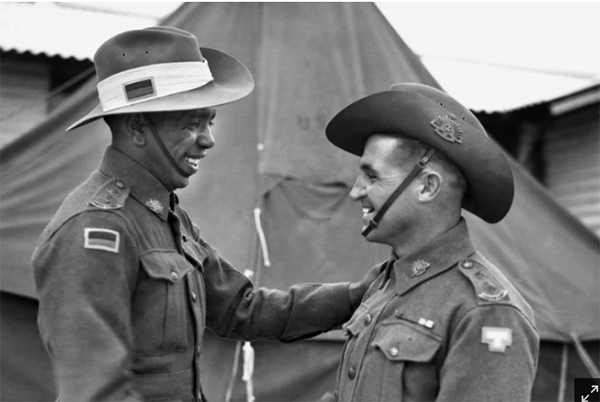 Lieutenants Reginald Saunders and Tom Derrick VC congratulate each other on receiving their commissions in November 1944. The two men shared a tent during their officer training. Credit: Australian War Memorial.

Aboriginal and Torres Strait Islander readers are warned that the following article contains images and names of deceased people.

Wide smiles, wider eyes, and written in ink below “Belongs to DADDY”.

Daddy was Reginald Saunders, the first Indigenous soldier to be commissioned as an officer in the Australian Army. He served with distinction in World War II and Korea.

A bundle of letters handed over to the Australian War Memorial by Auntie Glenda, Lieutenant Saunders’ daughter, give for the first time an insight into the private life of Australia’s most senior Indigenous soldier.

Robyn van Dyk, head of the Research Centre at the memorial, believes the letters convey the pressures placed on wartime relationships in a way that was often left unsaid in intimate correspondence from World War I.

The story begins with Reginald’s younger brother, Harry Saunders. He enlisted at Caulfield, Victoria, in May 1940, leaving behind his labouring job and his new sweetheart, Dorothy Banfield, aged 18. 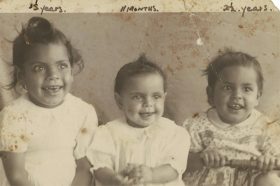 Shortly after, he writes of training with the 2/14th Battalion AIF in northern NSW and of his plans once the war is over. “I am going to grab my deferred pay and dash straight over to you and when I come back to Victoria I am going to bring my sweet little bride with me (that’s of course if she’s agreeable).”

On October 25, 1942, he writes from New Guinea to say he had been in action against the Japanese and had been missing in action for about seven weeks and lost all his photos of Dorothy. He says any hopes of being with her for Christmas seemed unlikely “because the Army has different ideas from mine”. 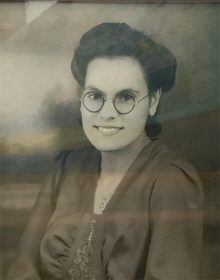 Little more than a month later, on November 29, 1942, he was involved in heavy engagements near Gona Mission. In the late afternoon, as he and several mates made their way towards a Japanese bunker, he was shot in the head and killed instantly. He is believed to have been 21.

Dorothy then writes to Reginald Saunders, who is serving with the 2/7th Battalion, telling him she was Harry’s girlfriend.

Reginald, “somewhere in New Guinea”, writes back in May 1943, saying: “I received your letter today, I was very surprised to hear from you as I did not know Harry had any particular girlfriend.

“I have been in action against the Japanese and have been able to avenge Harry a couple or more times … If I have the chance when I am in Melbourne again I will come out and see you.”

And he did. On April 3, 1944, at St Matthew’s Church of England, Prahran, Melbourne, Reginald married Dorothy Mary Banfield, who was serving in the Women’s Auxiliary Australian Air Force. But, as later letters reveal, the relationship appears challenged by the distance of his service.

From the Korean War in January 1950, he writes: “I am sorry I wrote you such a nasty old letter, but … [erased] I still love you with all my heart and soul.” Further on: “Please don’t take any notice of my sour letters because I can’t help it if I get lonely and homesick … Believe me dear I love and I trust you in spite of what I say.” 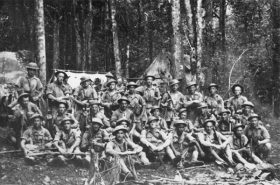 A group portrait of 9 Platoon, A Company, 2/14th Infantry Battalion on the Kokoda Trail. Harry Saunders is the fourth from right in the front row. Australian War Memorial.

He spends most of a letter in December 1951 affirming his love for Dorothy and the three girls and ends with a poem to her.

Michael Bell, Indigenous liaison officer at the memorial said the letters were “moving and emotional”, written from the field of battle. “You can see the human side of him.”

Head researcher Robyn van Dyk said she could see that the distance had created some tension. “One letter [January 1950] looks to me like it has been kept and folded and unfolded a lot. The letters were certainly something that was held on to and valued. 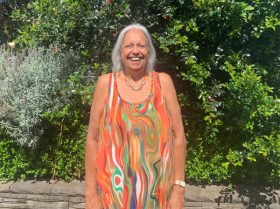 “I see two people who love each other but time and distance is taking its toll on their relationship … I think as a society it is something we really do need to come to terms with.”

Auntie Glenda Humes said she wished she had known Harry. She said her mother would read the letters every Anzac Day.

“They were kept in a biscuit tin on top of the wardrobe,” she said. “One day we climbed up and read them. I was about 12.

“By the end of Korea, their marriage was done, my mother brought up six children by herself. They remained the best of friends, and she was with him when he died. His last words to her were ‘thanks, mate’.”

Reginald Saunders, who died in 1990, was appointed MBE in 1971 for his work in establishing communications between the government and Indigenous communities.

The letters have been digitised by the AWM with new Commonwealth funding.